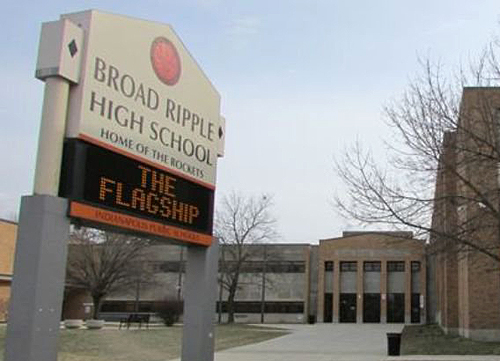 Purdue Polytechnic High School says it is working on a move to make Broad Ripple High School its permanent home through a partnership with Indianapolis Public Schools, instead of moving to a newly constructed mixed-use building in Broad Ripple.

The school’s change in plans comes as IPS prepares for a multitude of changes under its Rebuilding Stronger plan, which would close seven schools and reconfigure grade levels throughout the district.

Under the Rebuilding Stronger plan, which the school board is expected to vote on in November, the old Broad Ripple High School would house a new Broad Ripple Middle School with International Baccalaureate programming. If Purdue Polytechnic reaches its own deal with IPS, the charter high school would also make its permanent home in the former high school building.

Such an arrangement would provide a solution to the long-standing issue of what to do with the high school, which closed in 2018. The building has come to exemplify the constraints of a state law that requires school districts to sell or lease vacant buildings for $1.

Purdue Polytechnic High School’s board of directors is expected to vote in November on an agreement for the charter school to permanently occupy the Broad Ripple High School building.

Any such agreement would also have to be approved by IPS. IPS did not immediately respond to a request for comment.

IBJ reported this week that Indianapolis-based developer Keystone Group is going ahead with a commercial-and-residential real estate project planned adjacent to the Broad Ripple parking garage on College Avenue, although Purdue Polytechnic was pulling out of its plan to be the building’s main tenant. Purdue Polytechnic had committed to moving its campus to the five-story project, planned directly south of the Keystone-owned parking garage in the 6200 block of College Avenue.

Purdue Polytechnic, a charter school that has two campuses in Indianapolis, already occupies parts of the third floor of Broad Ripple High after striking a deal with IPS earlier this year to operate in the school for the 2022-23 school year while the mixed-use building is under construction.

But Scott Bess, executive director of Purdue Polytechnic High School, said Thursday that staying in Broad Ripple High School would allow the booming school to grow even more. Its plan to occupy part of the mixed-use building on College Avenue would have limited the school to just 400 students, he said.

The school has its biggest freshman class ever this year, Bess said, and staying in the current location would allow the campus to grow to roughly 550 to 600 students.

“We had such interest, we all of a sudden realized if that growth continues we won’t fit in the [newly constructed] building,” Bess said. “We also wouldn’t be able to do the things that make us special, like a big makerspace, a dedicated robotics room — those are all things that eat up space.”

The campus for the closed Broad Ripple High School, a 16-acre site on Broad Ripple Avenue, has been considered one of the district’s most attractive real estate assets that could bring significant funds to the district if sold.

But state law requires the district to offer vacant schools to charter schools for a lease or purchase price of $1 before selling them on the open market.

Purdue Polytechnic initially expressed interest in using the school for its second Indianapolis campus in 2018, but later backed out of the plan, citing issues with the district’s leasing timeline.

But this year, the charter school and IPS reached an agreement: Purdue Polytechnic could temporarily house its north campus in the building by becoming one of the district’s innovation network schools.

Innovation schools are given more autonomy while remaining part of the district.

While Purdue Polytechnic is paying IPS about $260,000 to use parts of the third floor for this school year, Bess said, both parties are still working out a final cost of occupying the building permanently.

The school will work with IPS to modify its existing innovation network agreement to allow Purdue Polytechnic to occupy the building long term, he said.

Under the Rebuilding Stronger plan, Broad Ripple High School would also get facility upgrades targeted for completion in the summer of 2026. Those include fixing HVAC and plumbing issues, improving athletic fields and increasing security features—all welcome upgrades for a building first constructed in 1923.

The IPS school board is also expected to vote on the Rebuilding Stronger plan in November, with an updated draft of the plan presented in October.