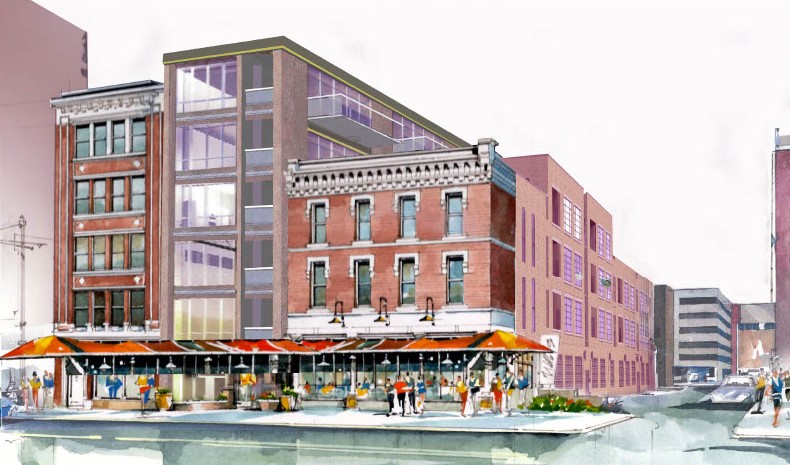 A rendering of the proposed condominium project at 117-119 S. Meridian St., the first phase of which has been approved. (Courtesy of Prince Alexander)

The Indianapolis Historic Preservation Commission on Wednesday voted to approve changes to the design and construction timeline for a downtown condominium project planned along South Meridian Street.

The IHPC last month delayed a vote on the project to Wednesday after commissioners expressed concerns over the proposed phasing of the development.

Plans call for an addition to the 140-year-old building at 119 S. Meridian St. that formerly housed Krieg Brothers Religious Supply House. The development would also incorporate a thin strip of vacant land immediately to the north.

The addition, ranging from three to four stories, would include up to 31 parking spaces and 12 condos, and combine three storefronts along South Meridian Street into a single, 8,467-square-foot retail space.

Plans submitted to the IHPC show most of the condos will be about 1,650 square feet, with a few expected to be up to 2,830 square feet. There will also be two rooftop penthouses and other rooftop gathering spaces.

The project will still be split into three phases—as proposed in November—but construction has been rearranged to prioritize restoration work to the former Krieg Brothers building:

— Phase 1: Southern and western façade restoration work, along with construction of residential units and part of a ground-level parking structure at the rear of the property. The parking would mostly be used by residents in condos at the Bright Building at 111 S. Meridian St., also developed and owned by Jupiter Group;

— Phase 2: Infill construction at an empty lot at 117 S. Meridian St. and completion of restoration work at the former Krieg Brothers building;

— Phase 3: Development of the midsection between the historic building and the rear section of the project, which would include the remaining residential units and another part of the parking garage.

Developer Rick Coombes told the IHPC the first-floor retail space—the northernmost portion of which is currently occupied by Good Games—will be marketed for a single tenant, rather than split up. The combined storefront will run 83 feet along Meridian Street.

The Meridian Condominiums project, approved in 2017 by the Indianapolis Historic Preservation Commission, was initially expected to include an addition with as many as six stories—blending new construction with the existing façade—with 24 residences. About two-thirds of the Krieg Bros. building was demolished in 2018 after it was determined that structural issues were too costly to repair.

Jupiter Group had to rethink its timeline after anticipated construction costs ballooned to more than $14.5 million—nearly 50% higher than the original budget of up to $10 million.

President Bill Browne, the lone “no” vote Wednesday, and other members of the commission said they had concerns about financing for the project and whether it will be finished.

Coombes has told the IHPC staff that he and a group of investors are committed to the development, but added phasing is required to make the finances work.

He said bringing in buyers for units in the 111 building would help with finances as well since many downtown buyers aren’t willing to commit without having the covered parking planned for the project’s first phase.

“It’s not going to stop—I’m positive that it will go through,” he told commission members of the project. “It’s just finding the tenant for that front piece is what you really need.”

The IHPC’s approval is only for the first phase of the development, and Jupiter will be required to return to the commission before beginning on the infill construction—the design of which could change—and the midsection.

Indianapolis-based Prince Alexander is the architect on the project.