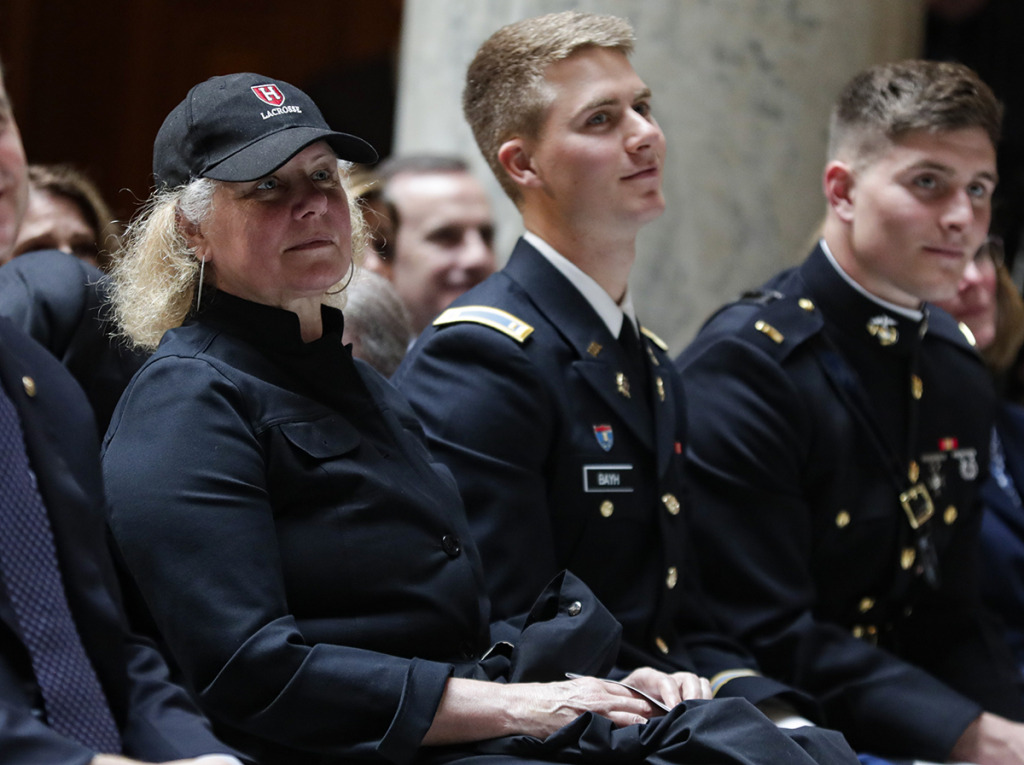 This May 1, 2019 photo shows Susan Bayh, the wife of former Indiana Gov. Evan Bayh, at the Indiana Statehouse in Indianapolis. (AP Photo/Michael Conroy)

“It is with great sadness that we report the passing of Susan Breshears Bayh after a long and courageous fight against glioblastoma and its complications,” the family said in a media release. “Susan was an incredible person who led a life full of love, courage, and accomplishment.”

Bayh died Friday night in McLean, Virginia, a family spokesman said. She was Indiana’s first lady for eight years after her husband, a Democrat, became governor in 1989.

Evan Bayh served two terms as governor before being elected to the U.S. Senate in 1999 and serving through 2011. The Bayhs have twin sons, Beau and Nick, who were born in 1995 while their father was governor.

Susan Bayh first underwent brain surgery in 2015 to remove a benign tumor. She later had multiple surgeries and radiation and immunotherapy treatments after a malignant glioblastoma was discovered in May 2018. That is the same type of aggressive brain cancer that killed Arizona Sen. John McCain in 2018.

Susan Bayh told reporters in 2019 that she was grateful for support she received during her health troubles.

“I think I’ve gotten probably more prayer letters from Indiana than anywhere,” she said. “It really doesn’t matter what religion it is, just as long as people are praying and keeping me up in somebody’s thoughts.”

The Bayh family said in its statement that “throughout her 2-year, eight-month battle against cancer, she never once complained or expressed self-pity. Despite a multitude of hardships, she continued to display her exuberance, happiness, and love for others.”

Bayh, who grew up in California and was chosen Miss Southern California in 1978, met Evan Bayh while both were working in Washington in the early 1980s. They married in 1985 as he was following his father, former U.S. Sen. Birch Bayh, into Indiana politics, leading to his election in 1988 at age 32 to become the nation’s youngest governor. Birch Bayh died in 2019.

Susan Bayh was an attorney who drew some criticism for her membership on several corporate boards while her husband held elected offices.

An IBJ editorial from 2009 noted that Susan Bayh was serving on five boards, including that of Indianapolis-based insurer WellPoint Inc. (now Anthem Inc.) while Congress was considering sweeping health care reform that became the Affordable Care Act. She served on the company’s board from 2004 to 2013.

She also served on the Board of Trustees at Butler University and taught as a visiting professor for several years in the fields of business, environmental affairs, and law.  She served on the Dean’s Council at Indiana University’s Paul H. O’Neill School of Public and Environmental Affairs. In addition, she worked as Adjusted Professor for her law school alma mater, University of Southern California, placing law students in public service internships and providing mentorship.

In 1994, she was appointed by President Bill Clinton to the International Joint Commission and served for six years overseeing issues arising between the United States and Canada.

The Bayhs had lived in Washington since Evan Bayh was elected to the Senate in 1998. He didn’t seek election to a third Senate term in 2010. He launched an unexpected comeback bid in 2016 for the Senate but lost to Republican Todd Young.

Republican Gov. Eric Holcomb said in a statement that Susan Bayh was “an extraordinary and radiant public servant, wife, mother and friend, who leaves a remarkable impact on our state and nation.”

Judy O’Bannon Willsey recalled getting to know Susan Bayh during the 1988 campaign as the wife of Evan Bayh’s running mate, Frank O’Bannon.

“I recall her eagerness and vigor as she was starting her law career, her family and in her role as Indiana’s First Lady. She was magnetic and her energy came through in all she did,” she said in a media release. “Her grace as she faced this battle with cancer these last few years was an inspiration.”

Bayh is survived by her husband, Evan; her sons, Nick and Beau; her parents, Bob and Carol Breshears; her siblings, Bob Jr., Ann and Linda; and numerous nieces and nephews.