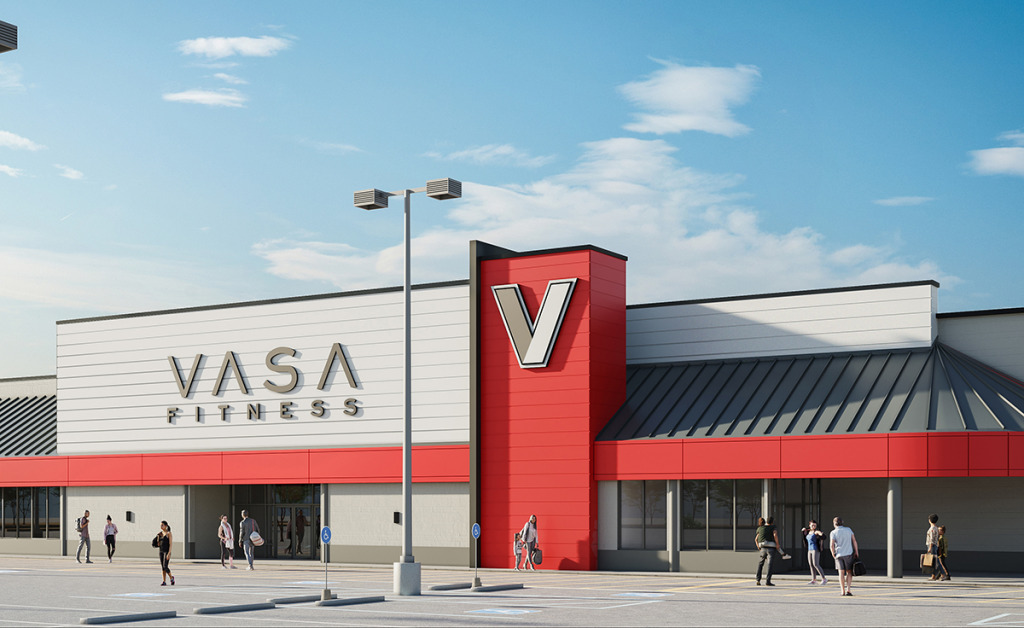 The club is expected to open “either late summer or early fall,” and will employ about 50 people, CEO Rich Nelsen told IBJ. (Rendering courtesy of Vasa Fitness)

Vasa is redeveloping the long-vacant grocery store at 6965 W. 38th St., into a 61,000-square-foot fitness facility, according to the firm. The building is part of The Villages at Eagle Creek shopping center that also includes a Target and several restaurants.

The club is expected to open “either late summer or early fall,” and will employ about 50 people, CEO Rich Nelsen told IBJ. Vasa has named Sable Smith as the location’s general manager.

Nelsen declined to share financial details for the project, citing company policy, but he said the company will “heavily invest … to ensure the facilities and equipment are state-of-the art. We are doing a complete renovation of the property.”

The gym was initially expected to open in fall 2020, but construction was delayed due to the pandemic.

Nelsen said he believes Vasa will be able to set itself apart from other fitness centers in the area with high-end exercise equipment and quality classes for prices that are lower than most competition, starting around $9.99 per month.

“Vasa Fitness’s ‘Mall of Fitness’ approach to club design is unique in the fitness industry,” he said. “It offers members everything they could hope for in a large, 60,000-square-foot expansive club with tons of amenities, while at the same time, providing multiple boutique fitness experiences that meet them where they are in their fitness journey, all without having to leave the building.”

Vasa is leasing the building from Indianapolis-based The Broadbent Co., but  it plans to sublease about 20,000 square feet of the structure’s 81,000-square-foot footprint to a separate, yet-undisclosed user.

The Villages at Eagle Creek supermarket was one of 18 stores closed by Marsh in mid-2017 as part of the company’s bankruptcy plan after the properties failed to sell at auction.

The location joins several other Marsh stores to be repurposed for non-grocery uses after their closure. They include a store in Shelbyville that was turned into a preschool; a grocery on East 96th Street in Fishers that’s now a corporate headquarters; and the store at Keystone and Broad Ripple avenues that’s being turned into a new branch for Traders Point Church.

Vasa has two other fitness facilities in Indiana: a former Kroger store at 5325 Thompson Road in Indianapolis and another in Lafayette. The company plans to continue evaluating additional growth opportunities in the state over the next couple years, Nelsen said.

The company has other locations in Arizona, Colorado, Illinois, Oklahoma, Utah and Wisconsin.