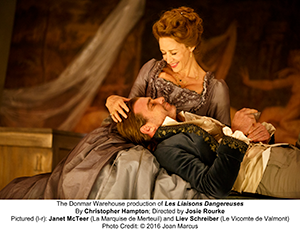 On a recent New York trip, I caught six off-Broadway shows (find reviews and an off-Broadway-for-beginnings guide here). I also visited one newcomer to Broadway. Well, actually an older show in a new production. Here are my thoughts:

About 30 years ago, Christopher Hampton’s play “Les Liaisons Dangereuses” was a feel-bad, feel-good hit, popular enough to spark three movies (one an official adaptation, another an adaptation of the original source material, and the third a modernized take on its story). Then, and now, it concerns a pair of devious manipulators, aristocrats who have no problem with acquiring power and revenge through destroying others, primarily through emotional and sexual manipulation. Former lovers the Marquise de Merteuil and the Vicomte de Valmont are more concerned with clever quips (example: “Only flirt with those you intend to refuse.”) than with anything resembling morality.

But things get more complicated when some actual feelings get involved.

In the new Broadway production, Janet McTeer’s Marquise is clearly in charge of the game, which makes for an unbalanced battle with Liev Schreiber’s Vicomte, who is fun to watch but isn't fully convincing as an unfailing seducer. The work is there, but the result is less Casanova and more the guy at the frat party who occasionally does okay for himself. That difference diminishes the impact of the events in the second act, leaving the play’s cleverness intact but its passions practically nonexistent.

The chandelier bedecked production–played out on a set where enormous paintings and empty frames are carried in and out by operatic extras–is handsome and evocative with any given moment seemingly recreated from a period work of art. Alas, like the paintings, what's on stage feels static.

And the cumulative effect of this attractive accessorizing, interesting leads, and solid supporting cast doesn’t overcome a core problem: Sometimes, the experience of a production can’t help but be influenced by the time in which it is produced.

In this case, a play that asks us to take pleasure in manipulation comes at the end of an election cycle where lies and misinformation are key strategic elements. Audiences should be forgiven if the show doesn’t feel as fun as it once was.