Two of three downtown hotel projects pitched by the same developer are progressing, while the third has hit a financing snag.

Indianapolis-based Sun Development & Management Corp. has plans to convert two buildings into hotels while constructing another on a surface parking lot. 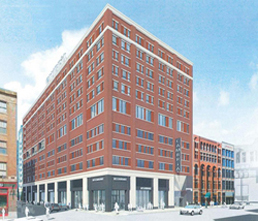 A rendering of the proposed Cambria Hotel & Suites. (Ratio Architects)

The one that would be newly built, a Cambria Hotel & Suites, now has taken a back seat to the other two as Sun seeks city assistance, Sun CEO Bharat Patel told Property Lines.

Sun plans to develop the Cambria on the lot at the northwest corner of South Meridian Street and Jackson Place. The company paid $4 million for the lot and another $3 million for the nearby One Jackson Square building at 233 McCrea St. between South Illinois and Meridian streets.

Sun bought the properties in a package from Maryland-based Choice Hotels International and is still on track to convert the 12-story One Jackson Square office building into a 120-room Tapestry hotel, Patel said.

But he said Sun is seeking between $3 million and $4 million in city assistance to offset the cost of the price of the surface lot and to build a public parking garage to accompany the $25 million, 11-story Cambria project with 190 rooms. The project cost includes the $4 million site acquisition.

The city has received an application for tax-increment financing assistance from Sun, a spokeswoman for the Department of Metropolitan Development said, but no incentives have been awarded. Conversations are ongoing, she said.

The Indianapolis Historic Preservation Commission approved the design in July and the permits are in hand to break ground, Patel said.

Meanwhile, Sun hopes by the end of the year to start work on the nearby Tapestry hotel, which Patel estimated to be a $15 to $18 million project, including the site acquisition cost. Sun is not seeking any city incentives for the Tapestry project. 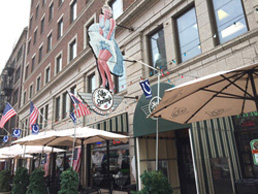 Only a few office tenants remain in One Jackson Place, which will be empty by the end of August, except for the Ike & Jonesy’s restaurant on the ground level. The downtown stalwart opened there in 1984 and will be a part of the hotel redevelopment, Patel said.

Owner Rick Eichholtz is excited about the future.

Before starting work on the Tapestry, Sun plans to break ground in August on the conversion of the city’s oldest African-American church into a hotel complex.

The City-County Council on Monday authorized issuing about $8 million in bonds for the $36 million hotel project, slated for the site of the Bethel African Methodist Church at 414 W. Vermont St. and along the Central Canal. 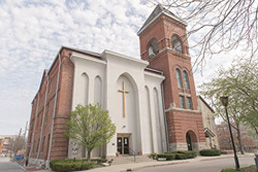 The Bethel African Methodist Church will be incorporated into the hotel project. (IBJ Photo/Eric Learned)

The Metropolitan Development Commission is set to give final approval on Wednesday.

Plans call for two hotels to be housed in separate seven-story towers on the property. They would share amenities on the lower floors, including meetings rooms and lounges. The church itself would be renovated and retrofitted as part of the complex.

The church was built in 1869 and has served the black community at its current location for nearly 150 years. But dwindling membership and an aging building requiring costly repairs have forced the congregation to sell the property.

Under the proposal, the city would issue the bonds to project owner Indy Canal Lodging Associates LLC and developer Sun. As opposed to typical tax-increment financing, the bonds would be so-called “developer-backed bonds,” a financing vehicle being championed by the Hogsett administration.