But this year—because the Super Bowl is being played in open-wheel country—the IndyCar Series has taken center stage.

With 33 of its cars dressed up in NFL team colors and placed just south of Monument Circle and the famed Super Bowl Roman numerals, IndyCar is capturing the attention of scores of visitors downtown.

Local Super Bowl host organizers estimated that more than 250,000 people viewed the IndyCars from Jan. 27 to Jan. 29. Each car was painted in one of the 32 team color schemes complete with logos, and one had an NFL Super Bowl theme, making 11 rows of three along Meridian Street.

“It was a very popular place for people to go and have their picture taken,” said 2012 Super Bowl Host Committee spokeswoman Dianna Boyce. “It’s definitely been one of our major attractions.”

“We really wanted to support the effort to host a Super Bowl here in any way we could, but no doubt, all the exposure has been very good for us,” said Indianapolis Motor Speedway spokesman Doug Boles. “The exposure in some ways has been even better than we anticipated.”

Tuesday, the cars were moved to the Indianapolis Motor Speedway, where the famed Brickyard hosted a party for 5,000 credentialed media members from around the country and across the globe. A bevy of local and regional dignitaries also attended. 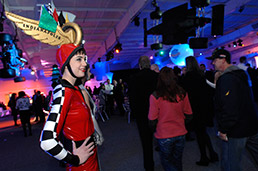 The Lombardi Trophy and Borg Warner Trophy—which goes to the Indianapolis 500 champion—were major attractions at the Tuesday night gathering. Speedway officials also allowed media members to take pictures of the New York Giants- and New England Patriots-themed cars sitting on the yard of bricks at the finish line.

Several open-wheel drivers including Ed Carpenter and Jay Howard attended and were interviewed.

The party was held on several floors of the Pagoda as well as in an expansive building near the garage area where IndyCars were suspended from the ceiling.
Journalists covering the Super Bowl were still raving about the party and the Speedway facilities on Wednesday morning.

Already this week, the NFL Network shot photos and footage of the Lombardi Trophy—which goes to the Super Bowl champion—at IMS. That footage will be used in several national telecasts.

NBC’s "Late Night with Jimmy Fallon" show and the syndicated "Ellen" TV show will use the Speedway as backdrops for broadcasts. Mexican and German broadcast stations also did stories this week about the Brickyard, as did Yahoo Sports, USA Today, the Boston Globe and myriad other print publications.

The value of the exposure for the Speedway and IndyCar Series easily exceeds $1 million and could be as much as $5 million, said Larry DeGaris, director of academic sports marketing programs at the University of Indianapolis.

“The best part of this week for the Speedway and IndyCar Series is they’re getting the attention of a lot of stick-and-ball fans and reporters who might not otherwise have been exposed to the sport,” DeGaris said. “There’s no parallel to the attention the Super Bowl brings, so this is a great opportunity for [open-wheel racing].”

But he said follow-up is needed for IndyCar to take full advantage of the attention.

“They can’t just take the approach of 'come and see how awesome we are,'” DeGaris said. “To maximize the impact of this week, the Speedway and series will need a lot of active cultivation. PR is a sales-based industry, where making the sale is getting the coverage.”

The additional exposure during Super Bowl week comes as the series is launching a new 2012 chassis and engine package, is attempting to figure out life after Danica Patrick, who departed for NASCAR, and is trying to rebound after a devastating crash at last year’s finale in Las Vegas that killed two-time Indianapolis 500 champion Dan Wheldon.

“All this comes at a very good time for the Speedway, and these are the types of things—the first-hand experience with the cars and the photo opportunities—that create deep, lasting impressions,” DeGaris said. “I think the interest built this week could really spur momentum for the series.”

After Tuesday’s media party, the NFL-themed IndyCars were dispersed to sites around the region where they will continue to be an attraction for local and visiting sports fans until Feb. 5, Boles said.A list of those sites is here.