It took less than a year for Michigan to follow Indiana’s lead in passing a right-to-work law.

Indiana in February became the first state in a decade to pass such a law, and it was all the more significant because of the state’s heavy concentration of manufacturing jobs and sizable union presence. The law prohibits labor contracts that require workers to pay union fees or join unions. 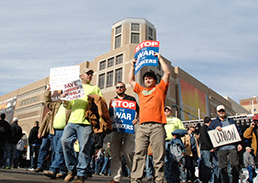 Michigan Gov. Rick Snyder said he reversed his stance on right to work after hearing about Indiana’s success in attracting new business. The Indiana Economic Development Corp. says 90 firms cited the law as a factor in their decisions on where to locate.

“They’ve had 90 companies in the pipeline for economic development say this was a factor in deciding to look to come to Indiana,” said Snyder, a Republican. “That’s thousands of jobs. We need more and better jobs in Michigan.”

The IEDC made a number of business relocation and expansion announcements this year in which company executives talked about right-to-work factoring into their decisions.

But another company, Indianapolis-based MBC Group, said IEDC erroneously reported that its plans to expand a packaging and printing plant in Brookville stemmed from the right-to-work law.

Indiana Gov. Mitch Daniels signed the law the same day it passed the Senate, following weeks of acrimony. House Democrats filed amendments trying to delay the vote and boycotted the Legislature before the measure passed that chamber 54-44.

Thousands of opponents had protested at the Statehouse. The United Steelworkers later filed a lawsuit, claiming the law violates a provision of the Indiana constitution barring demands for services “without just compensation.” Lake Circuit Judge George Paras allowed the suit to proceed in October.

Ball State economist Michael Hicks expects the long-term effects of right to work to be muted. He released a five-year study that found limited job-creation effects, which were difficult to disentangle from other business-friendly policies.

Right-to-work opponents say the law will weaken unions and lower wages. After studying right-to-work laws dating back to World War II, Hicks said he could find no statistically discernable impact on wages.•