IndyGo unveiled Thursday the design of its sleek, $20 million transit hub set to be built on a half-block surface parking lot in the heart of downtown.

Plans for the hub have been in the works for a few years. Currently, 27 of IndyGo’s routes have downtown components, and it’s likely that most, if not all, would intersect with the hub, according to IndyGo. Passengers would use the center for transfers. 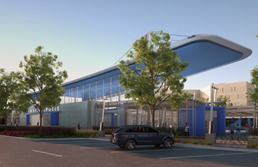 City officials hope the sleek structure will help spiff up a neglected portion of the Mile Square. (Image courtesy IndyGo)

City officials hope the transit hub will serve as a signature structure that could trigger further development in the area.

IndyGo’s release of the architectural renderings coincides with Mayor Greg Ballard’s State of the City address Thursday evening, in which he mentioned the hub.

“This sleek building will not only transform an empty parking lot, but also serve as the hub for transit,” Ballard said in his speech. “Just imagine people waiting inside for a bus connection with coffee and a newspaper, rather than huddled outside on Ohio Street.”

A federal grant will cover $13.5 million of the cost, with the city picking up the rest of the tab.

The 14,000-square-foot building will be constructed on a 1.9-acre parcel owned by the city and situated on the south side of Washington Street between Delaware and Alabama streets. It's directly across Washington Street from the City-County Building.

The hub will have 19 bus bays at the rear, closest to the Marion County Jail.

The transit hub will include 19 bus bays to the rear of the 1.9-acre parcel. (Image courtesy IndyGo)

The project will help spiff up a section of downtown already in the midst of a renaissance. Immediately to the northeast, a portion of the former Market Square Arena site is available for development and is among the sites that Cummins Inc. is seriously considering to construct a downtown building for its Indianapolis employees.

To the north of that site, Flaherty & Collins Properties is set to begin construction this year on an $81 million, 28-story residential high-rise.

IndyGo will be displaying the design starting Friday at the old Indianapolis City Hall.

The architects on the project are San Francisco-based URS Corp. and locally based Axis Architecture + Interiors.