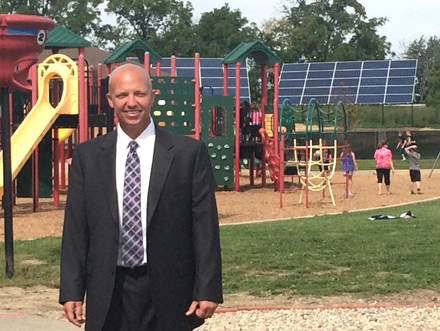 Sheridan Elementary School students playing outside at recess on a recent sunny school day in northern Hamilton County weren’t the only ones absorbing rays.

Their new backdrop is an array of thousands of solar panels that have just started powering the entire school district. Sheridan Community Schools, a small district of about 1,000 students, is now completely run on solar power.

Between the elementary, middle and high school buildings, Sheridan has a 1.8 megawatt system composed of 5,901 solar panels expected to produce about 2.2 million kilowatt hours of power.

It’s a move that Superintendent Dave Mundy says is primarily about saving money on energy with the added benefit of being environmentally friendly. Mundy anticipates saving “millions" over the life of the 20-year loan on the solar panels.

“It’s something any school should look into,” Mundy said. “Balancing a budget and trying to (estimate) the utilities cost is the hardest thing to do in school finance.”

The district spends about $290,000 annually on electricity, according to Mundy, and recently received a letter from its utility that its rates would rise between 4 percent and 7 percent in 2017.

Now, the district will pay a $290,000 loan payment on the solar panels for the next 20 years. The entire system has a warranty of 25 years but is expected to last around 40 years, said Bob McKinney, president of Johnson-Melloh, which installed the system and will provide maintenance.

Mundy said there was no capital cost to set up the system, and that it is entirely being financed by the loan.

“Our loan is equivalent to a locked-in electrical bill,” Mundy said. “The money that would have been spent on increased utility costs will go directly back into the classroom."

Sheridan is participating in the "net metering tariff" program through its utility, Duke Energy, McKinney said. Sheridan’s solar panel system has the intent of producing as much electricty as the district consumes each year. When Sheridan overproduces, kilowatt hour credits will appear on its account. During the winter, or other times when the system is producing less power, the district can pull those credits to apply to its bill.

Electricity prices have been on the rise for more than the last decade, and don’t appear to be slowing down.

The average price for commercial electricity—schools would be considered under this category—in Indiana went up nearly 60 percent from 2004 to 2014, according to data from the U.S. Energy Information Administration. The average price per kilowatt hour in 2004 was 6.31 cents and rose to 9.96 cents in 2014.

A 2015 report from the State Utility Forecasting Group at Purdue University predicted that real commercial electricity prices will rise until 2021 and then “remain relatively constant.”

The district is also cheering the environmental benefits from switching to solar—and using the new system as a learning opportunity for students.

They have predicted that the district’s investment in solar will eliminate the burning of 2.1 million pounds of coal each year.

Mundy said the school children are “fascinated” by the panels, some of which move throughout the day to soak up the most sun.

Johnson-Melloh set up computer monitors in the schools so the students can monitor the progress of the solar panels each day and see how much energy they’re producing and putting into the electrical grid.

“Our kids have done a lot of research,” Mundy said. “They’re very involved in everything we’re doing.”