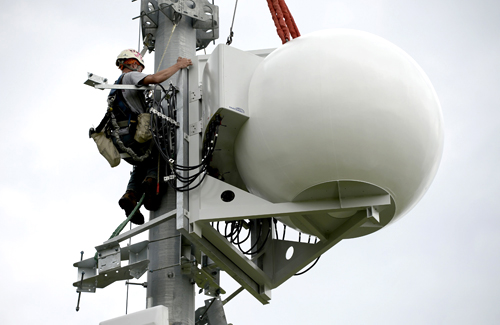 Those driving past the Indianapolis Motor Speedway in the last week might have noticed five 600-pound, sphere-shaped objects towering over the 2.5-mile oval race track.

And in May, Speedway visitors might notice better wireless service.

Verizon, the IndyCar Series title sponsor, is investing millions of dollars to make sure its customers can get wireless service while visiting the famed brickyard.

Although Verizon officials declined to say how much they are investing in the permanent infrastructure, a company executive said the installation is a multi-million-dollar project.

The high-tech spheres, called matsing balls, were first rolled out at the presidential inauguration in January and the Super Bowl in February. Built by hand, each matsing ball contains 36 to 60 antennas.Verizon officials expect the new technology to increase capacity of their existing wireless system at the track by 200 percent and coverage by more than 300 percent.

Verizon Principal Engineer Dan Huffman said the upgrade this year represents the largest installation of matsing ball technology in the United States and the first in Indiana. This also marks the first time that matsing balls have been permanently installed at a sports venue anywhere in North America, he added.

“The extreme focus provided by this technology will make this fan experience one of the best in the nation at a sports venue,” Huffman said.

The technology divides crowds into pieces like slices of a pie. Each slice can be adjusted individually and directionally based on real-time demand, Verizon officials explained.

Wireless service at sports venues—where large crowds of people are trying to use their smartphones for various data-demanding reasons—has become a huge issue in recent years. Features like Facebook Live and 360-degree (aka virtual reality) live streaming video have increased demand for data in a big way.

The new infrastructure can handle more than 20 terabytes of data on a single day, said Verizon spokesman Steve Van Dinter.

“With how big a deal this race is, and how important it is for fans at the race to be connected, it made sense for Verizon to install this technology permanently at the Indianapolis Motor Speedway,” Van Dinter said. “Wireless connectivity is no longer viewed as a luxury. It’s viewed as a necessity, and it’s viewed as something sports fans paid for as part of their ticket price.”

Van Dinter said the installation of the new technology is not a condition of the company’s IndyCar sponsorship. Verizon is the biggest wireless carrier in the United States with 145.7 million subscribers as of the fourth quarter of 2016.

“We place them based on concentration of people, and there’s great need in turn 3,” he said.

Verizon already has smaller antennas placed in the straightaway grandstands, other parts of the track and just outside the track that will help supplement the new matsing balls, Verizon officials said.