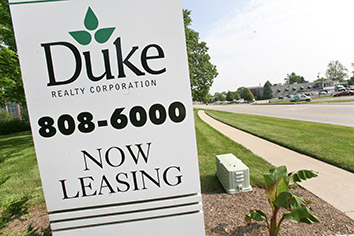 Duke Realty Corp. would like to move its headquarters from Carmel to Keystone at the Crossing on the north side of Indianapolis and is seeking $2.9 million in city financing assistance to help offset the cost of constructing an office building.

The publicly traded real estate investment trust would co-own the four-story, 78,000-square-foot building with Indianapolis-based PK Partners LLC, which would serve as the project developer. Duke would occupy 73,000 square feet and would pay rent as a tenant. Plans call for the remaining 5,000 square feet to be occupied by a restaurant.

The building would be constructed on 2.9 acres owned by PK Partners at 8711 N. River Crossing Blvd. that's occupied by the former Champps restaurant, near the Fashion Mall at Keystone. Champps closed in November after a 22-year run. The building would be demolished to make way for the Duke project

Executives of Duke and PK Partners presented their plans for the project Wednesday afternoon to the city’s Metropolitan Development Commission at a pre-meeting conducted before official proceedings.

The companies declined to provide a cost estimate for the project but said the $2.9 million would offset costs related to a single-level, mostly underground parking garage. The rear of the garage would be at ground level, with an outdoor area overlooking the 25-acre lake that's surrounded by office, hotel and apartment developments.

Parking also would be available at street level. The ground floor would contain the restaurant and Duke’s lobby, and the top three floors would house Duke’s offices.

The $2.9 million in financing would come in the form of what’s known as a developer-backed bond. The bonds would be issued by the city to finance construction of the parking garage, based on the tax increment expected to be generated by the project. But the developer, not the city, is responsible for the difference, if for some reason the increment doesn’t cover the city's debt payments on its bonds.

Duke has been headquartered in the Parkwood Crossing office park at Interstate 465 and North Meridian Street for the past 18 years. The 1.2-million-square-foot complex is one of the Indianapolis area’s largest and highest profile office parks.

In August 2016, Duke sold Parkwood Crossing for an eye-popping $162.9 million to a partnership of Philadelphia-based Rubenstein Partners and Strategic Capital Partners of Indianapolis.

“For us, it will be fun to go back to an area where we started,” said Charlie Podell, senior vice president of Duke’s Indiana and Ohio operations. “It’s going to help our brand, as we look to bring younger people into our organization.”

The site where Duke wants to build its headquarters is surrounded by apartment communities that might be attractive to young adults. They include River Crossing at Keystone Apartments, Lake Clearwater Apartments, 82 Flats at the Crossing and the new Quarry.

PK Partners completed the Quarry as part of its $100 million mixed-use River North at Keystone project, just north of the Champps site. Besides the Quarry, River North consists of two office buildings and a Hampton Inn and Suites hotel.

“This is a project that [Mayor Joe Hogsett] is excited about, to have a large publicly traded corporation return home,” said Angela Smith-Jones, deputy mayor of economic development.

Construction could start this summer, if the project progresses on schedule. The bond issue is set to be presented to the City-County Council on April 30, with possible approval on May 21. The MDC is slated to sign off on it June 6.

Duke Realty has 203 employees and is expected to add 25 jobs with the move, officials said.

Duke in recent years has streamlined in portfolio and sold off its office properties to focus on the industrial market. It owns 146 million square feet in 21 cities.