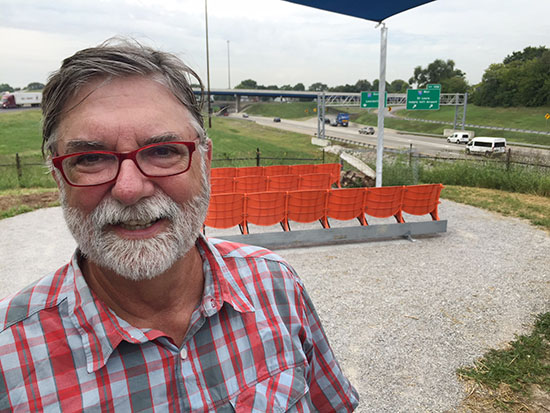 Where tens of thousands of motorists every day saw just another scrubby little hill along an interstate, Tom Battista saw a park.

It would be a place for reflection or respectful debate, to the soundtrack of hundreds of wheels on pavement. Maybe more importantly, it would be a place that could connect residents of foundational Indianapolis neighborhoods separated 50 years earlier by interstate construction.

Local residents probably know Battista best as co-founder of Bluebeard in Fletcher Place, one of the key restaurants in reforming Indianapolis’ culinary reputation. He also has separate career in concert production, working on tours for artists such as Jimmy Buffett, David Bowie and Parliament Funkadelic.

The idea for the little park got stuck in Battista’s mind like a pop music earworm. To make it happen, he learned he would need to work through the city, the state and the federal government, while many folks told him he was nuts to even try. After five years of negotiating and planning, The Idle–A Point of View  opened earlier this month.

The park overlooks Interstates 65 and 70 at their south split. The access point is on the Virginia Street bridge between Fletcher Place and Fountain Square. Battista took IBJ Podcast host Mason King on a tour of the promontory and through the micropark's origin story.

Click here to find the IBJ Podcast each Monday. You can also subscribe at iTunes, Google Play, Tune In and wherever you find podcasts. Here are some of our recent podcasts:

IBJ Podcast: What will it take to turn the Brickyard 400 around?

IBJ Podcast: At 57, she’s quitting her gig as a top executive to volunteer around the world

IBJ Podcast: Stars of HGTV’s 'Good Bones' on making a living, changing neighborhoods, and what's next