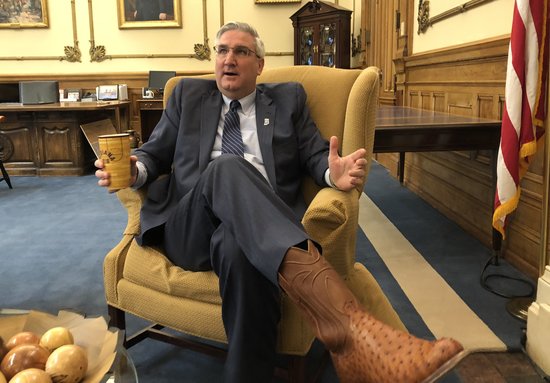 Eric Holcomb's office, shown here in 2018, is undergoing painting and plaster work as part of a larger update of his office suite. (IBJ file photo)

Gov. Eric Holcomb says it's "very important" to keep the Indiana Pacers in the city, and he is willing to consider a pitch from Indianapolis convention officials who are seeking long-term funding to update the city's sports and meeting facilities.

The Capital Improvement Board of Managers, with cooperation from Indianapolis Mayor Joe Hogsett’s administration, plans to ask the General Assembly for at least $8 million in additional annual funds to shore up its budget as it plans an expansion of the Indiana Convention Center.

But the CIB is looking long term, too. In the legislative session that begins next month, the quasi-governmental agency will seek an unknown amount of additional funding for a yet-to-be-released 25-year plan, which is expected to include major renovations at Bankers Life Fieldhouse and other venues the board controls.

“I’m all ears," Holcomb told IBJ on Tuesday. "I really do want to see it work. I see their vision, quite frankly.”

But Holcomb told IBJ that the CIB has not yet shared the details of its plans or told him the specific dollar amount it's seeking—and those details will determine his level of support.

What's clear is that renovations to Bankers Life could be key to securing a long-term deal to keep the Pacers in Indianapolis. The Pacers’ lease at the fieldhouse runs through 2024. The Indianapolis Colts have a deal to use Lucas Oil Stadium through 2037. (The Colts could terminate the deal in 2030, though, if the team is not among the top five NFL teams in gross operating revenue.)

Herb Simon, the 84-year-old owner of Pacers Sports & Entertainment, has talked openly about his desire to make a long-term commitment to the city, saying last year that the team will stay put for the rest of his lifetime and beyond as his son, Steve Simon, someday takes over. But in return for staying, Simon has said, the Pacers want improvements to the fieldhouse.

Neither the CIB nor the Pacers have provided any specifics about proposed upgrades. CIB President Melina Kennedy has told IBJ that renovations would revolve around shoring up infrastructure, implementing new technology—both behind the scenes and for patrons—and creating communal spaces.

Those involved in the discussions have told IBJ there are a few funding options, including extending the life of certain tourism- and entertainment-related taxes that currently fund CIB; expanding the footprint of the Professional Sports Development Area, which captures certain state income and sales-tax revenue for the CIB; and increasing the cap on the amount the CIB can receive from the PSDA.

Holcomb said he wants to learn more about what the CIB is specifically requesting before taking a stand on the plan. But he said he supports the idea of modernizing and improving the venues the CIB oversees, including the fieldhouse.

Still, he has questions. “Are we talking about extending current arrangements?" he said. "What is that new revenue you’re talking about?”

Holcomb said the Pacers have helped make downtown Indianapolis what it is today, so keeping the team here is important.

“I think it’s part of our identity,” Holcomb said. “We just wouldn’t be the world class city that we are today but for the Pacers and the Colts and now the JW" Marriott.

Plus, Holcomb said, renovating Bankers Life is a much cheaper option than building a new stadium. Arena renovations generally run about $50 million to $200 million, while building new often costs $500 million to $1 billion.

“Let’s figure out how to do this," Holcomb said. "I look forward to having those discussions."