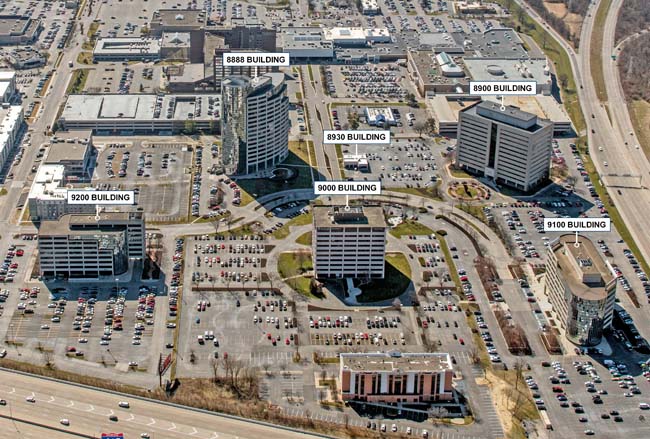 Keystone at the Crossing—the largest Class A office park in Indianapolis—has been sold to a pair of out-of-state investment groups in a deal estimated at about $142 million.

The 1,054,866-square-foot, six-building office campus was sold this week to a joint venture between New York City-based DRA Advisors LLC and Chicago-based M&J Wilkow Properties. The 27-acre property has been owned by Newton Square, Pennsylvania-based Equus Capital Partners Ltd. since 2005.

The deal has been in the works for about two months, sources told IBJ.

Chris Locatell, senior vice president of Equus, told IBJ the company has held the office park in its portfolio for “longer than it usually does” and is selling it to invest in other properties. He declined to share a sales price, indicating the parties involved in the transaction signed a confidentiality agreement.

Officials from the acquiring companies did not immediately respond to requests for comment. Both companies say they specialize in value-added investment, so it is likely they plan to make improvements to the property.

Local commercial real estate brokers said Class A office space in the Keystone area generally sells for about $135 per square foot, although they’ve seen sales for as low as $100 and as high as $170 per square foot. That would put the range of the Keystone at the Crossing deal at $105 million to $179 million.

The office park, developed between 1975 and 1988 by Indianapolis-based Duke Realty, is home to dozens of the area’s largest companies, including several real estate brokerages and law firms. The building involved in the deal were 8888, 8900, 8930, 9000, 9100 and 9200 Keystone Crossing. Most of the buildings range from nine to 18 stories.

The office complex, adjacent to the Fashion Mall at Keystone, is about 83% leased, according to Equus.

JLL has been the leasing agency for the property since at least 2006, and a spokeswoman for the company said listing agents John Robinson and Abby Zito are expected to remain as the office park’s leasing team under the park’s new ownership.

The sale marks the fourth major office park sale on the north side in the past four years, following the acquisition of the Precedent Office Park for $132.7 million in late 2017; Parkwood Crossing for $162.9 million in 2016 and Castleton Park in 2015.

Keystone has undergone more than $20 million in capital improvements since being purchased by Equus, the company said. Its amenities include a food truck court, outdoor seating, tenant lounges, a fitness center with showers and locker rooms, two parking structures and surface lots adjacent to each building. Several of the buildings also have walkways to the Fashion Mall.

Locatell said Equus is “continuing to look in the market” for additional investment opportunities. Equus owns one other office park in the Indianapolis area—the 330,000-square-foot Penn on Parkway, just north of Interstate 465 and east of U.S. 31—which is up for sale.

All parties were represented in the transaction by Kenneth Glomb and Stephen J. Livaditis of New York City-based Eastdil Secured LLC.