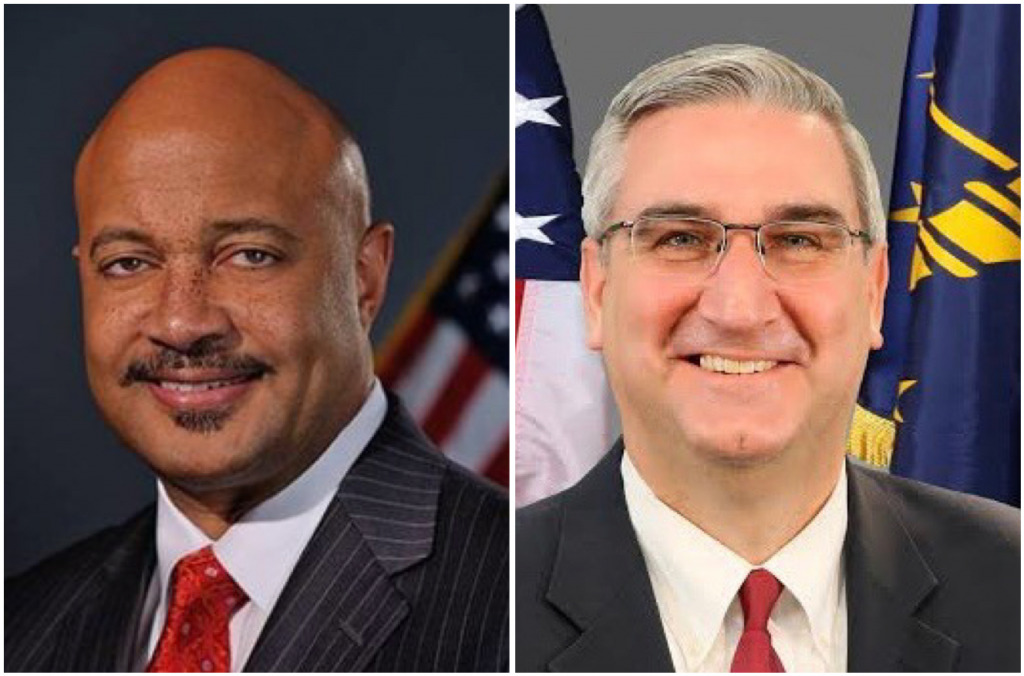 Gov. Eric Holcomb lacks the authority to enforce the statewide mask mandate he announced on Wednesday and should call a special session if he wants to implement the requirement, Indiana Attorney General Curtis Hill said late Wednesday.

Hill, a Republican, issued an advisory opinion saying that state law doesn’t give the governor specific authority to require face coverings or to create penalties for failing to wear a mask.

“Without properly delegated authority from the General Assembly, the proposed order would not have the force and effect of law,” Hill wrote in the advisory opinion, which was requested by five state senators, all Republicans. “The General Assembly would need to specifically and clearly allow for a mask mandate by law.”

Holcomb, also a Republican, announced on Wednesday afternoon that he would issue an executive order—effective Monday—requiring masks for anyone who is 8 years and older in indoor public places commercial entitles, transportation services, or in outside public spaces when social distancing isn’t possible.

He said the order would require students in grades 3 and up to wear masks in school.

The governor said exceptions will be made for medical purposes, strenuous physical activity, eating and drinking.

Holcomb said there won’t be any “mask police,” but violations will be considered a Class B misdemeanor, which can result in up to 180 days in jail and a fine of up to $1,000.

Hill said in his advisory opinion that “the governor has taken conduct that has not been specifically criminalized by the General Assembly and unilaterally declared it as criminal.” And he said lawmakers have not given Holcomb the authority to create a crime.

The opinion says that the Indiana Constitution limits the legislative branch’s ability to transfer its lawmaking powers to administrative agencies in the executive branch.

Holcomb’s office did not immediately respond to a request for comment about Hill’s opinion.

Sens. Jim Buck of Kokomo, Blake Doriot of Syracuse, Aaron Freeman of Indianapolis, Mark Messmer of Jasper and Jim Tomes of Evansville asked Hill to weigh in with an “official opinion” regarding Holcomb’s authority to order a mask mandate and make it a criminal offense not to wear a mask.

Hill’s opinion is labeled an “official opinion,” however it is considered only advisory and does not carry the weight of a court ruling. The attorney general said in the opinion that he encourages the use of masks but said “individual rights secured by the Constitution do not disappear during a public health crisis.”

Holcomb has issued a series of executive orders under the state’s Emergency Management and Disaster Law in response to the pandemic, including one that declared a public health emergency in Indiana. He has renewed that order four times, with the most recent order set to expire on Aug. 3.

The Emergency Management and Disaster Law gives the governor broad powers once he has declared an emergency. Among the provisions, the governor is permitted to “use all available resources of the state government and of each political subdivision of the state reasonably necessary to cope with the disaster emergency.” In addition, the law says the governor can “take any action and give any direction to state and local law enforcement officers and agencies as may be reasonable and necessary for securing compliance” with the emergency law.

The governor said Wednesday that an escalation in the number of COVID-19 cases in Indiana led to his decision to require masks.

But Hill said in his opinion that as Indiana has moved out of the early stages of the pandemic and there is “less of a sense of immediate emergency,” the governor should be acting with support of the General Assembly.

“As the representatives of the people, the General Assembly should have a say in the regulation of behavior and whether there is a criminal element to violating an order issued by the governor,” the opinion said.

Hill wrote that Holcomb has left lawmakers “on the sidelines” during what he said is “perhaps the most significant event of the century.”

Democrats in Indiana have already called for a special session.

The Senate Democratic Caucus, House Democratic Caucus and Indiana Black Legislative Caucus announced Tuesday during a press conference that they want lawmakers to come back to Indianapolis in August to address criminal justice reform, absentee voting and oversight of how the state is spending federal funding.

House Speaker Todd Huston said then that he did not see a need for a special session, but he said “important and productive conversations on these topics are ongoing.” That comment came before Holcomb’s announcement about a mask mandate.

Hill is in the last year of his term. He intended to seek reelection but did not receive the Republican Party’s nomination last month following accusations that he drunkenly groped a state lawmaker and three other women during March 2018 party marking the end of that year’s legislative session. A special prosecutor declined to bring charges against him.

Holcomb called for Hill to resign after the accusations and did not support Hill’s effort to win the GOP nomination.

56 thoughts on “Attorney General: Holcomb has no authority to enforce statewide mask mandate”