Home » Kegs have been out, canned beer in, during pandemic 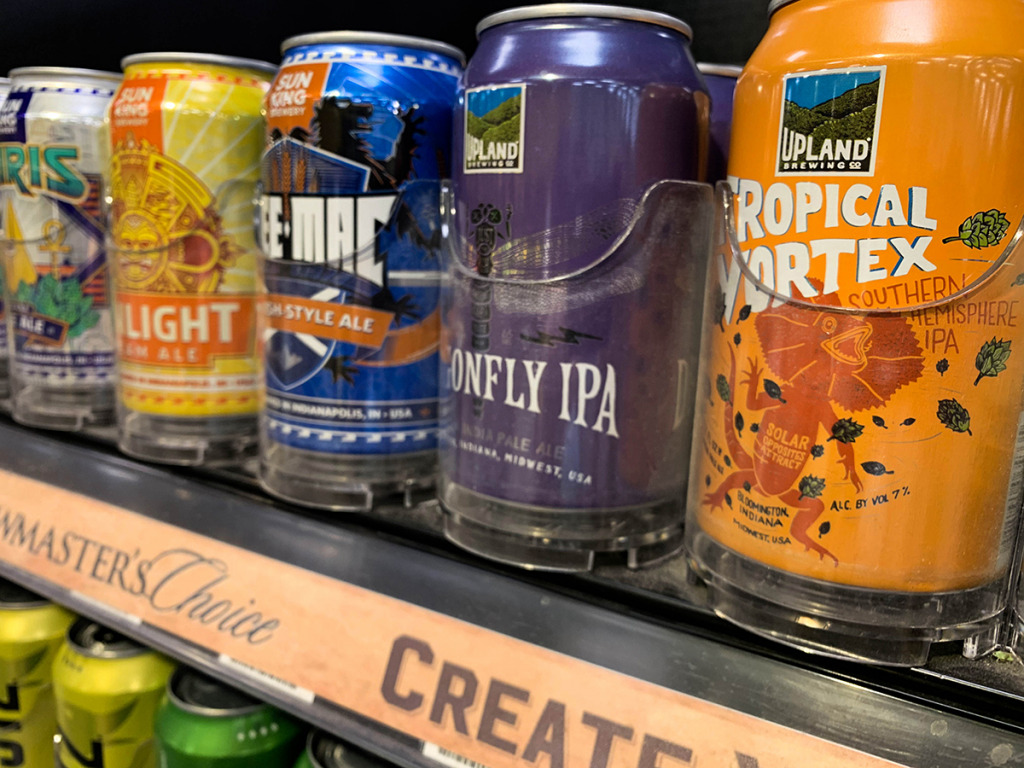 When the pandemic dried up the demand for beer at customer-limited bars and restaurants, local brewers had to shift focus to sales at grocery stores, pharmacies and packaged liquor stores.

That meant selling a lot more beer in cans than in kegs.

Sun King Brewing Co., one of the largest Indiana-based breweries, typically cans about 60% of its beer for sale at retail stores. The other 40% is sold by the keg at bars and restaurants.

“What happened for Sun King was pretty much an industry-wide standard,” said Clay Robinson, co-founder of Indianapolis-based Sun King. “Even smaller breweries that hadn’t canned before were putting their beer in cans.”

That shift showed up in increased alcohol sales across the board at retail stores, according to Newark, New Jersey-based National Retail Solutions, which sells point-of-sale systems to independent convenience stores, liquor stores and other small retailers.

Last year, its thousands of customer stores sold $288.7 million worth of beer, cider and flavored malt beverages—a 19% increase from 2019. Sales of spirits totaled $89.1 million, up 48%. Wine sales rose 45%, to $19.2 million. The increases in all three categories significantly outpaced the 17% overall sales growth at these retailers.

Suzy Silliman, National Retail Solutions’ vice president of data strategy and sales, said the numbers show that consumers who would normally order drinks at a bar or restaurant were instead purchasing alcohol for at-home consumption. “I think our stores benefited from the behavior changes that were forced upon us.”

The big question now is how soon and to what degree buying trends will shift back to pre-pandemic patterns as warmer weather arrives and the spread of COVID-19 begins to ease.

“That’s a really hard one,” Robinson said. “We talk about that a lot.”

David Bower, president of Bloomington-based Upland Brewing Co., is also unsure what the future holds and how closely things might return to pre-pandemic behavior. “We’re still in a fairly tumultuous time.”

Upland, which is also among the state’s largest brewers, sells some of its beer at its own establishments, which include two brewpubs in Indianapolis and one in Carmel. But the company sells most of its beer wholesale, both to bars and restaurants and to retailers.

Ordinarily, Bower said, about 70% of Upland’s wholesale beer sales are to retail stores, with the other 30% sold at non-Upland restaurants and bars. Last year, that split was 85%/15%. The company’s overall beer sales stayed flat year over year.

Selling more of its beer in retail stores also led to some other changes, Bower said. “The grocery store consumer is, in many ways, different from the craft-beer consumer.”

As one example: Upland typically brews a wide variety of beers, including small-batch varieties for bars, where patrons enjoy sampling a changing array of brews. Grocers, though, want a more limited number of varieties that don’t change as often.

During the pandemic, customers also tended to buy their beer in larger quantities so they didn’t have to visit the store as often, Bower said. Upland’s 12-can packages became more popular as a result.

Mark Lasbury, managing editor at Indianapolis-based craft-beer-industry promoter Indiana on Tap, estimated that about 75 breweries around the state added canning lines for the first time during the pandemic, and another 20 or so expanded their existing canning operations.

All this canning has led to another challenge for brewers: an aluminum-can shortage that developed about six months ago.

Robinson said Sun King anticipated the shortage and purchased 1.2 million cans last year—double the number it usually buys—so that it doesn’t run out during this summer’s peak season.

But other brewers are in a scramble.

“We’re sourcing from three different manufacturers to keep up with demand,” said Nathan Huelsebusch, co-owner and president of Bargersville-based Taxman Brewing Co. “We’re in a free-for-all [to find cans] on the open market.”

Because of the demand, Huelsebusch said, prices have fluctuated by up to 50%. Taxman has been able to find enough cans, he said, but the company is spending more for them.

Ordinarily, Huelsebusch said, Taxman sells about 25% of its beer at its own restaurants; 15% at other bars and restaurants; and 60% at groceries, liquor stores and other retailers.

Sales are down about 50% at bars and restaurants, he said, but up about 15% at retail stores. All told, Taxman’s beer sales rose 7% last year, a slowdown from the 20% growth the young brewery had anticipated.

Nashville-based BWQOHT Inc., which produces both beer and spirits, hasn’t been troubled by the can shortage because it uses glass bottles.

Jeff McCabe, BWQOHT’s executive chairman, said the company usually uses about 20% of its products at its own restaurants, with the remainder sold wholesale to bars, restaurants and retail stores.

The big shift for BWQOHT last year, McCabe said, is that spirits sales surpassed beer sales for the first time. He doesn’t think this is related to the pandemic, but rather to the fact that spirits are a growth category in general right now.

Another potential contributor is that the company introduced a lot of spirits products last year. It had planned to introduce four spirits but ended up accelerating those plans, launching nine.

The move, McCabe said, was in part to show that the company was taking positive action during a difficult year. “We wanted to convey confidence to our employees. It was really important for us to be as proactive as we could be about this situation we were all in together.”

It’s unclear yet whether the trends that developed during the pandemic will stick around.

“I don’t think anybody has a good forecast on what actually is going to happen,” said National Retail Solutions’ Silliman.

Huelsebusch predicted that bar and restaurant sales will rebound as pandemic restrictions continue to loosen. “I definitely think people are eager to get back out.”

Lasbury, of Indiana on Tap, said the keg business has begun to pick up again as customers return to bars and restaurants. But at the same time, he also believes consumer behavior might be slower to change. “Some people have just changed their drinking habits. They’re drinking more at home.”

Because of that, Lasbury said, brewers might be able to retain the retail-store sales they gained during the pandemic while also seeing keg sales increase.

“Their total production may end up going up,” he said. “That would be a nice outcome. It will take a while to tell if that comes to fruition.”

Meanwhile, Upland is preparing to open its newest restaurant, in Jeffersonville along the Ohio River, April 9. And, Bower said, Upland will come out of the pandemic a more nimble and innovative company.

“2020 completely shook things up. … We don’t expect anything as extreme as what happened in March 2020 to happen again, but if it does, we are absolutely prepared for it,” Bower said.•