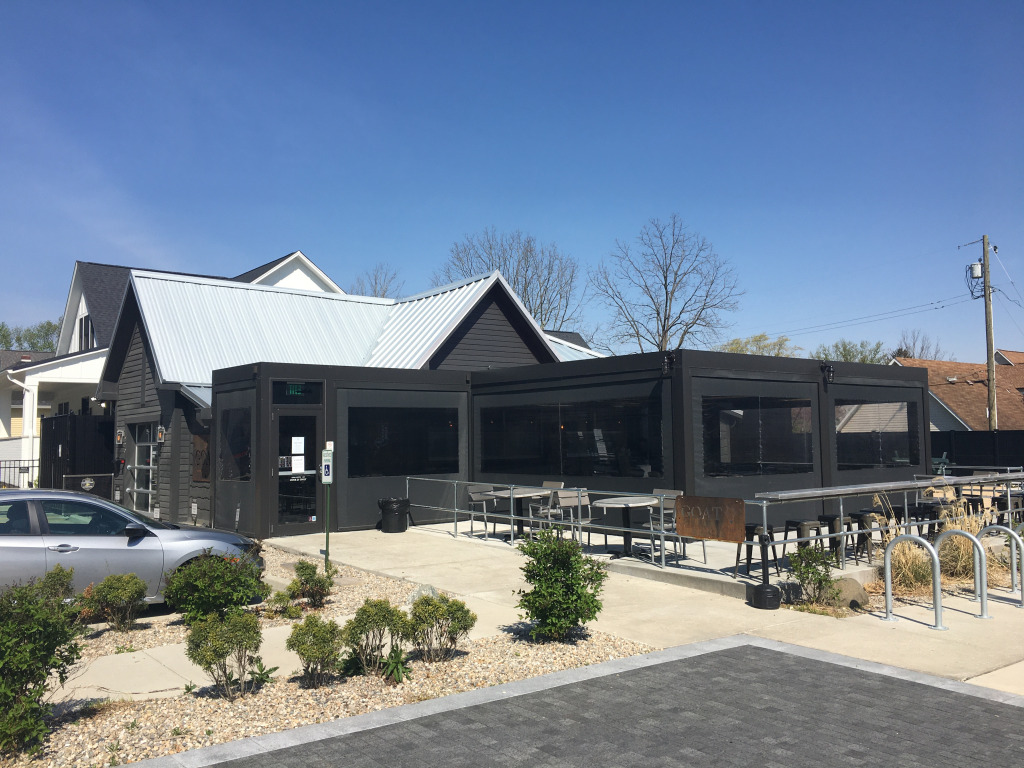 The owners of The GOAT tavern in Carmel, which has been closed since April 2021, are seeking approval to expand the restaurant and bar before they reopen it.

The Carmel Plan Commission on Tuesday night held a public hearing to discuss the design plan for The GOAT, or Greatest of All Taverns, that would add 2,940 square feet to the existing 2,300-square-foot building.

The additions would include a new restaurant area with 87 seats—reduced from an original plan for 124 additional seats—and six more restroom stalls. The expansion plan does not include an outdoor seating area. The current building has 70 seats combined between the interior and patio areas.

New entrances and exits would also be situated away from the nearby residential area.

“The design of the building is meant to solve some of the main issues from the past, and that was the noise and the lack of restrooms,” said Rachel Keesling, a planning administrator with Carmel’s Department of Planning & Zoning.

Residents who spoke at Tuesday’s public hearing said they were pleased with the proposed changes.

“This is greatly improved over the original situation that was pertaining for the neighbors,” Allison Brown said.

The GOAT, owned by Kevin and Megan Paul, opened in August 2020 at 220 2nd St. SW at the former site of Bub’s Cafe, which had long catered to breakfast and lunch crowds. Within months, the city began receiving complaints about noise, public urination, public intoxication, littering, vomiting, trespassing and other nuisance activities outside the bar.

Mayor Jim Brainard said at a December 2020 City Council meeting that Bub’s Cafe was granted a variance in March 2007 to operate in an area adjacent to neighborhoods. When The GOAT moved in, the variance assigned to that property was transferred to the new business.

Brainard told the council the city’s staff failed to notice that the variance only granted restaurant operations until 2 p.m. The GOAT’s official hours were 3 p.m. to 1 a.m., but it sometimes stayed open until as late as 3 a.m.

The city instituted a set of temporary restrictions meant to address the issues, physical improvements to the building and plans for additional restrooms to be built.

However, the Carmel Board of Zoning Appeals effectively forced The GOAT to close in April 2021 when it denied Kevin Paul an updated use ordinance that would have allowed for the continued operation of the bar.

The Carmel City Council in March approved a request to rezone the property from residential to business to allow The GOAT to reopen.

The bar’s owners would be required to end outdoor service by 7 p.m. and move all patrons indoors by 7:45 p.m. Alcohol service would end at 11:45 p.m. Sunday through Thursday and by 12:45 a.m. Friday and Saturday.

The GOAT would also be prohibited from having outdoor speakers and be required to establish and maintain a neighborhood hotline.

The Pauls also own Brockway Pub and Danny Boy Beer Works in Carmel.

The GOAT’s expansion plan will next go before the Carmel Commercial Committee on Sept. 6 before heading back to the Plan Commission for final approval.