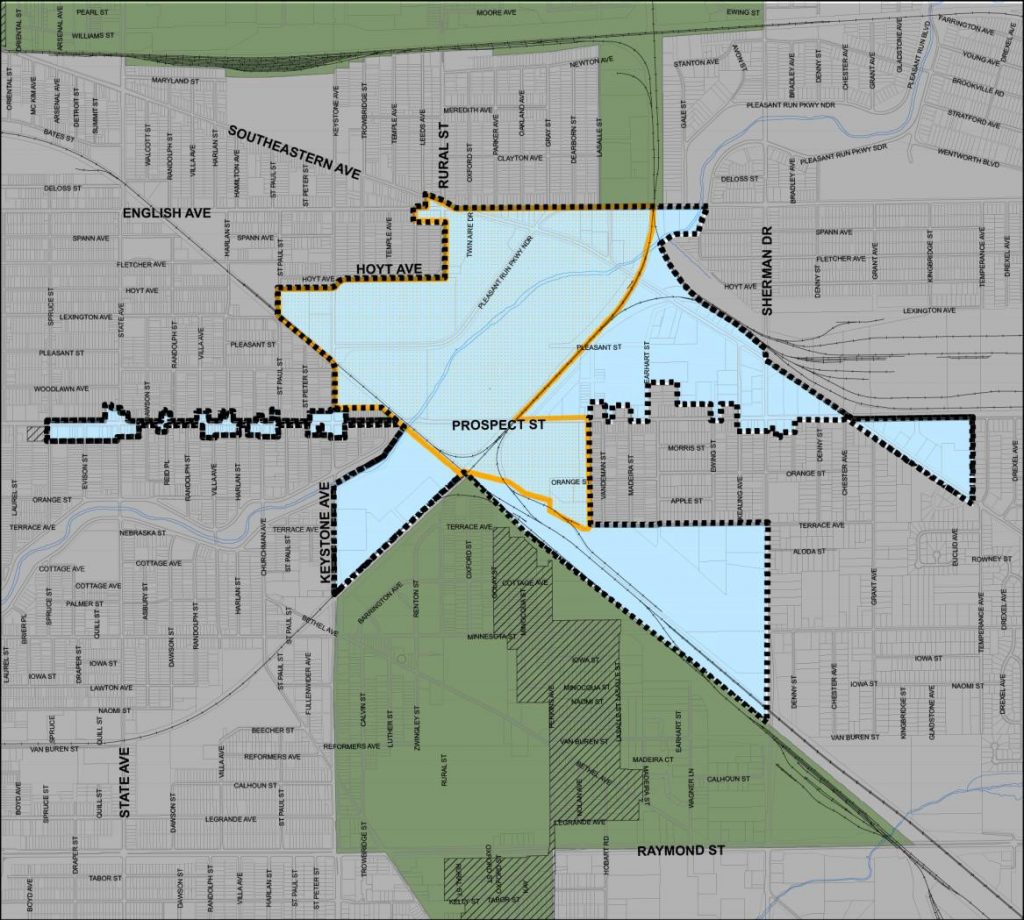 A map of the proposed tax-increment financing allocation area, outlined in yellow, and the proposed economic development area, in blue, for the Twin Aire neighborhood.

A City-County Council Committee on Monday recommended approval of a new tax-increment financing district for the Twin Aire neighborhood, which could lead to development opportunities in an area that will soon be home to the city’s new criminal justice complex.

The Metropolitan & Economic Development Committee voted unanimously to send a proposal to create the TIF district—and a related economic development area, or EDA—to the full council with a do-pass recommendation. The council is expected to vote on the matter at its Nov. 18 meeting.

The creation of a TIF allocation area and EDA allow the city to offer incentives to spur growth in the neighborhood southeast of downtown—particularly areas such as the former Twin Aire Drive-in site and the Twin Aire Plaza retail center, which are being eyed for potential developments that could include office, retail and residential uses.

The TIF designation could entice developers looking to invest in other parts of the neighborhood, including commercial and industrial properties adjacent to the justice center that the city believes would be good opportunities for investors.

It’s likely the city would offer incentives related to developments in the neighborhood using TIF dollars, much the way it does in other parts of the city, including downtown.

The city also expects to use tax-increment financing to help fund infrastructure improvements on and near the $570 million justice center, the first phase of which is now under construction.

The area is slated to be home to the new Marion County Jail, court houses, the sheriff’s office, and an assessment and intervention center. It’s being constructed on a 140-acre site once home to Citizens Energy Group’s coke plant.

The oddly-shaped TIF allocation area would be roughly bordered on the north by Hoyt and Southeastern Avenues and English Avenue; on the east by railroad tracks; on the south by Terrace Avenue and another set of railroad tracks; and on the west by St. Paul Street and Keystone Avenue.

The justice center campus would be within the TIF district. There is also an TIF district south of the proposed Twin Aire district, along with EDAs both to the north and the south.

A large portion of the TIF and EDA areas is part of the IndyEast Promise Zone, which creates grants and funding opportunities for developments in that area.

The separate but related EDA for Twin Aire would be comprised of the TIF district, along with several spokes. One would run along Prospect street, ending at Spruce Street to the west; another would extend southwest of Prospect to Keystone Avenue, along a railroad line; another would extend east along Southeastern Avenue, to near Temperance Avenue, bordered on the north by Prospect Street; and a fourth would run along Prospect Street eastward to Sherman Drive, bordered on the south by a railroad line.

The EDA would allow the city to secure additional resources for the improvement of public infrastructure, including streets, utility connections and other public facilities. The resources include improved prospects for certain types of funding mechanisms that could be utilized in redevelopment projects, such as New Markets Tax Credits, Housing Tax Credits and Opportunity Zone Funds.

The EDA designation effort follows a city-led visioning process for the site, through which community members and other groups—Citizens Energy, the Local Initiatives Support Corp. of Indianapolis and the U.S. Economic Development Administration—identified potential redevelopment opportunities throughout the Twin Aire neighborhood.

Among them were a new village center; a community center; enhanced green space and athletic fields; multifamily and town house development; a maker village with light-industrial businesses; and enhanced retail options.

If approved by the City-County Council, the proposal would return to the Metropolitan Development Commission—which gave preliminary approval in June for a confirmatory resolution to create the district.