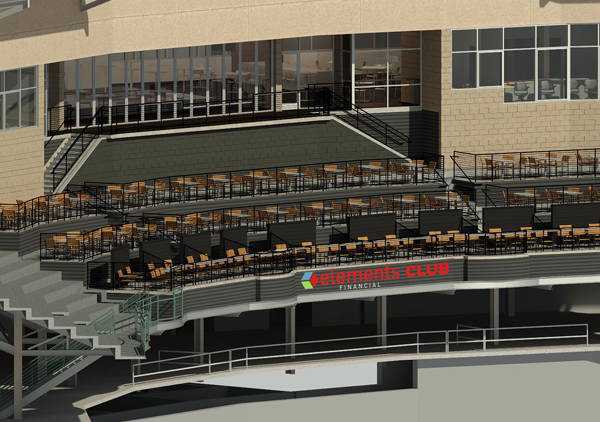 The Indians' home-plate club area will be named the Elements Financial Club beginning in the 2020 season and include signage. (Image courtesy of the Indianapolis Indians)

The Indianapolis Indians on Thursday announced the signing of a naming-rights deal with a local credit union for the team’s new club space behind home plate in Victory Field.

Elements Financial Federal Credit Union has agreed to sponsor the 4,500-square-foot club, which is part of $8.3 million in improvements being made to the stadium that were announced in May. Construction on the project is scheduled to begin after the 2019 season and conclude before the 2020 season.

The multiyear deal, which also names Elements as the team’s official credit union, is a renewal of a partnership between the entities that began in 2015. Financial terms of the deal were not disclosed.

Elements Financial is the second-largest credit union in the Indianapolis area, according to IBJ research, based on 2018 assets of $1.5 billion. The credit union, founded in 1930, has six branches and more than 107,000 members.

“The Indianapolis Indians are thrilled to partner with Elements Financial on a space that we expect to be a hallmark of the Victory Field experience for many years to come,” said Indians President and General Manager Randy Lewandowski in written remarks. “Through [this] partnership, we will be able to curate a premium experience that not only offers the best vantage point to watch baseball, but arguably the best outdoor view of downtown Indianapolis.”

The Elements Financial Club is expected to include a 37-foot retractable glass wall that opens to additional outdoor seating. The bar for the space is expected to be in the shape of a home plate, and there will be several big-screen televisions throughout the space.

Club ticket holders will be provided beer and wine, as well as a rotating menu of food, which will be developed by the Indians and their concessions and catering partner, Aramark Sports and Entertainment.

The club is expected to be a year-round space that can be utilized by team sponsors and others looking to host receptions during the offseason and when the Indians are on the road.

The stadium improvements will be the most extensive changes made to Victory Field since it opened in 1996.

The Indians are paying for most of the renovation—about $6.3 million—while the CIB is kicking in $2 million to complete its commitments from a 2015 lease extension, which included $6 million in improvements to Victory Field over four years.

The first two phases of improvements spelled out in the 2015 lease extension included an upgraded audio system and new video boards before the 2017 season, and extensive improvements to the suite level before last season.

The team has invested an estimated $6 million in the venue since it opened. That investment has funded Wi-Fi upgrades, new terraces, a restaurant and other improvements. The team and CIB split the $18 million it cost to build the stadium.

IBJ first reported the team’s plans in April, but at the time the cost had not been finalized.

The project will also add about 3,000 square feet of office space for the Indians’ front office operations—which have more than doubled over 23 years—and will relocate the press box and television and radio broadcast booths. Five suites are expected to be lost with the renovation.