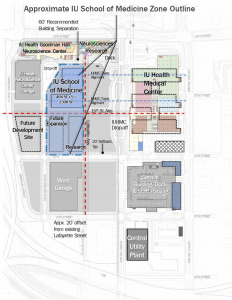 The Indiana University School of Medicine, an anchor on the IUPUI campus for decades, will move the bulk of its classrooms and operations into a new $245 million building on the expanded Methodist Hospital campus in 2024.

The IU Board of Trustees approved the new site, which is west of Senate Avenue and just south of the IU Neurosciences Research Building and the IU Health Neuroscience Center on 16th Street.

The move will take place in conjunction with IU Health’s massive, downtown consolidation of its Methodist and University hospitals onto one campus, the university said Feb. 5.

Operations at Methodist Hospital and IU Health University Hospital, which is 1.5 miles southwest of the IUPUI campus, will be consolidated into the new $1.6 billion hospital when it opens in 2026. The future use of the two current hospitals is still under evaluation.

All along, the goal of the huge new urban campus has been to incorporate the medical school alongside the new hospital. IU has said for more than a year that it planned to move to the expanded campus, about two miles north of its current location. But details of its exact new location were sketchy until this month.

The move will uproot much of the medical school’s traditional operations. All classroom instruction for medical students will go to the new campus, as will graduate training programs in the clinical sciences for residents and fellows, spokeswoman Katie Duffey said Monday in an email to IBJ.

Some administrative offices also will move to the new campus, but IU has not yet determined if the dean and associate deans will move, Duffey said.

Most research labs and related facilities associated with doctoral programs will stay put on the IUPUI campus or on other sites, she said.

Construction is planned to begin in 2022, and the medical school is aiming to take occupancy in late fall 2024.

IU said the new site for the medical school will provide flexibility and scale to accommodate medical education facilities as well as future research facilities. It is referring to the new campus as an academic health center.

“This state-of-the-art facility, a critical part of the academic health center project, will transform how we prepare researchers and health care professionals to face the health challenges that lie ahead,” said Jay Hess, dean of the medical school, in a written statement.

The new medical school will be about 350,000 square feet and include classrooms, teaching and research labs, offices, and related support space.

IU said it will request $75 million in state funding. The remainder of the $245 million project will be funded by the IU School of Medicine and private grants.