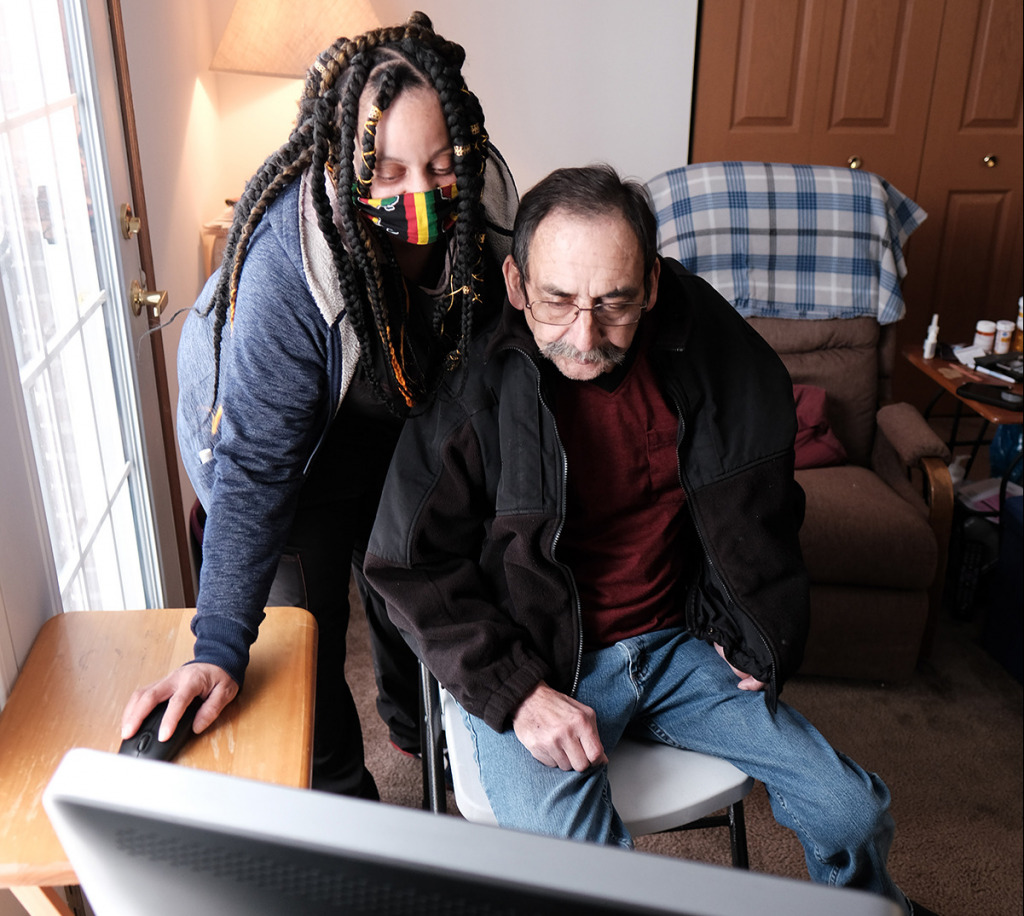 When Glenna Taylor of Indianapolis launched her personal care agency, Faith Filled Hands, in 2017, it was the fulfillment of a longtime dream.

“I’ve always had the thought, ‘Why work for someone else and make them millions, when I can work for myself and make millions?’” Taylor said.

She had worked as a medical assistant for three years, then as a certified nursing assistant for 14 years, before taking the step of opening her own business. The company, which offers clients at-home assistance with needs like cooking, housework and personal care, has 20 employees (down from 32 pre-pandemic).

Taylor also has bigger ambitions—she’s working to open a continuum-of-care facility that would offer both assisted-living and nursing care for residents and hopes to start construction on that project within two years.

Indiana has a shortage of entrepreneurs like Taylor—and that fact has larger implications for Indiana’s economy, according to a new report from the public-policy think tank Brookings Institution.

The report, “Indiana GPS: Strategies for Resilience,” says new-business creation activity is lower in Indiana than in many other states. As a result, the report argues, the state is not as well-positioned as it might be to rebound from economic downturns.

“New-firm creation and entrepreneurship are a source of nimbleness,” said Mark Muro, a co-author of the report and a senior fellow at the Brookings Institution’s Metropolitan Policy Program. “This issue shouldn’t be discounted. This is one way to move through a rough time.”

Rick Proctor, executive director of entrepreneur services and the Business Ownership Initiative at the Indy Chamber, said entrepreneurs help an economy quickly adjust as conditions shift. “Small businesses pivot like no other. … They don’t have the luxury of waiting it out.”

As an example, Proctor said, his office helped a small business launch a food delivery service for the homebound when the pandemic hit last year.

But in Indiana, more people work for older, established firms than is the case in many parts of the country.

Nearly 40% of Indiana’s firms are at least 16 years old, and those companies employ about 80% of the state’s workforce.

In comparison, 31% of the nation’s firms are at least 16 years old, and they employ about 75% of the country’s workforce.

Entrepreneurial activity is even lower among the state’s minority populations. Minorities make up 21% of the state’s population, the report says, but they own only 12% of Hoosier businesses that are younger than 2 years old.

“People of color in Indiana are not starting businesses at the rate you might expect, even given their share of the population,” said Robert Maxim, a Brookings research associate who co-authored the Indiana GPS report.

And it’s not just Brookings that sees Indiana’s lack of entrepreneurship.

“The ecosystem here, the entrepreneurial climate exists, but it’s hard for me to say that I see it booming,” said Nick Mmbaga, assistant professor of entrepreneurship and innovation at Butler University.

Mmbaga, who lived in the Tennessee cities of Nashville and Knoxville before moving to Indianapolis in mid-2019, offered several potential reasons for Indiana’s sluggish entrepreneurism.

One cause, he believes, is cultural. “We can think about Silicon Valley and Palo Alto and San Francisco and those [entrepreneurial] places. These are places that have actors and systems that are tolerant of risk and failure. They celebrate it to some degree, and I’m not sure if that’s the case here.”

Indiana’s relative lack of immigrants might also be a factor, Mmbaga said. Only about 5% of the state’s population was born outside of the country, according to the American Immigration Council. Nationally, 14% of U.S. residents are foreign-born.

Indiana has less startup capital—crucial for new businesses but considered risky by banks—than many states, said David Johnson, CEO of the Central Indiana Corporate Partnership. The group commissioned the Washington, D.C.-based Brookings to create the Indiana GPS report, with support from the Lilly Endowment Inc.

They can be an important source of job creation, especially for people facing barriers to employment, such as lack of transportation or history of incarceration.

“More people have more access to small-company jobs than they do to big companies,” Johnson said.

Small-business owners, he added, tend to hire employees through personal networking. That means the pathway to employment at a startup might be easier than at a big company with a more complex hiring process.

“It may just be more accessible for people to come into a smaller environment with people that they know,” Johnson said.

Startup activity can also benefit Indiana’s larger, more established companies, he said. “The larger companies are going to have more vitality if they’re in a landscape with more activity.”

Johnson said having a mix of larger and smaller companies in a particular industry helps build a strong industry ecosystem, including a qualified workforce. The startups can also act as local suppliers for the established companies, building a local supply chain that makes it more attractive for the big companies to keep their operations here.

“Proximity still matters, even in the virtual world,” he said.

The Indy Chamber suspended its business-coaching activities at the start of the pandemic, turning its attention instead to a rapid-response lending program for businesses hurt by COVID-19.

The chamber resumed that coaching earlier than anticipated, Proctor said, because, by April and May, people were again expressing interest in starting new businesses. “We’ve had dozens of people go through those courses over the last nine months or so.”

The chamber is also working on a pilot program in connection with the Indiana University Kelley School of Business that will allow the chamber to increase its coaching capacity, Proctor said.

In 2019, the chamber’s Business Ownership Initiative became a federally certified Community Development Financial Institution, giving the organization access to more funding sources and allowing it to receive larger grants to pay for its work.

At CICP, the life sciences initiative BioCrossroads and technology initiative TechPoint are both active in promoting entrepreneurship in their respective industries, Johnson said.

Larger companies also are a source of entrepreneurship, both within their walls and by sparking related startups, he said. He cited Eli Lilly and Co. as a prime example. “A lot of the innovation has come from spin-out opportunities, spin-out molecules from Lilly.”

“I think there are a number of intentional efforts going on right now,” he said. “We need more efforts like that.”•

One thought on “Entrepreneurship activity in Indiana is sluggish, Brookings report finds”