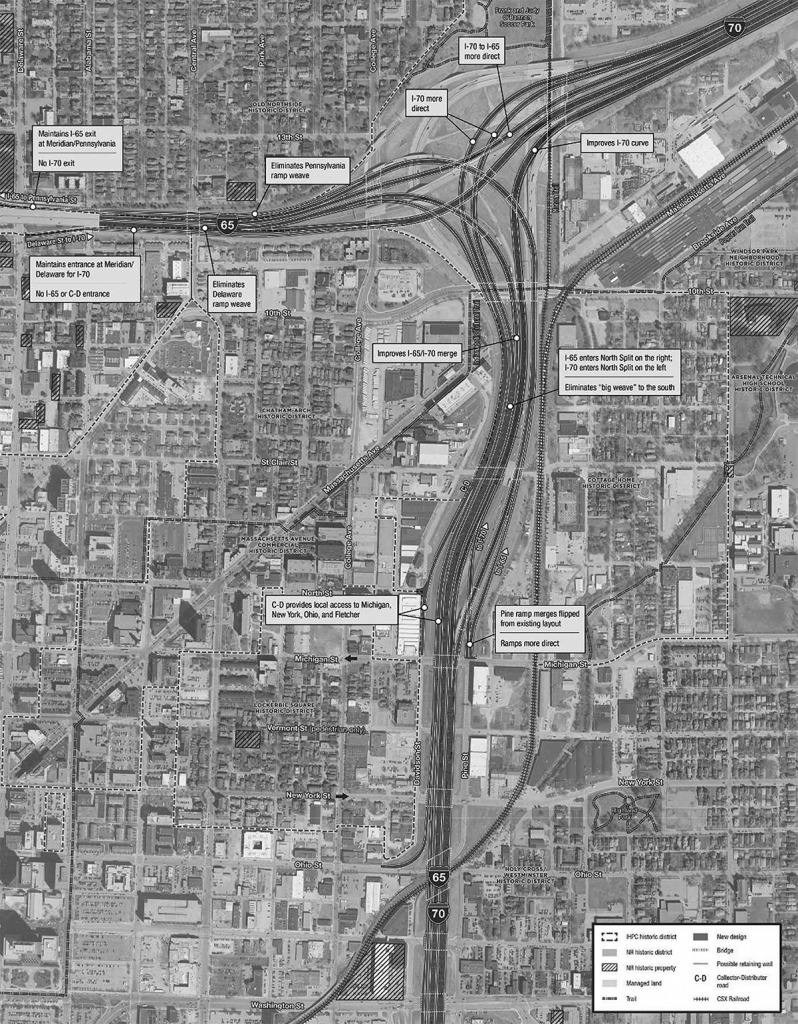 A map of the work planned on the North Split. (Image courtesy of INDOT)

Work to revamp the North Split interstate interchange on the northeast side of downtown is expected to begin in three or four weeks, and drivers should expect long-term roadblocks.

Some road and ramps—including the stretch of Interstates 65 and 70 between East Washington Street and the North Split—will be closed for a year or more, the Indiana Department of Transportation announced Tuesday.

The project will redesign and reconstruct the Interstate 65/Interstate 70 interchange, including reconfiguring traffic patterns and replacing aging pavement and bridges. The project will also add landscaping, bicycle/pedestrian infrastructure, decorative lighting and other features to help integrate the highway with adjacent neighborhoods.

Work is set to begin in December and last for 25 months. The project’s price tag is nearly $320 million.

INDOT said it will close I-65 and I-70 between East Washington Street and the North Split beginning in mid-May, and this closure will last for the duration of the project. Through traffic will be routed to Interstate 465.

Other details of traffic impacts:

— Starting in early December, the Michigan Street exit ramp from the I-65/I-70 collector and distributor road will close for about a year.

— After the Michigan Street exit ramp reopens, the Ohio Street ramp will be closed for about a year.

— The I-65/I-70 collector and distributor road will be closed south of the Ohio Street exit ramp for the entire construction period, and during this time there will be no access to Fletcher Avenue.

— Some local streets will close for up to 90 days at a time during bridge replacement work. Washington and Pennsylvania streets will remain open at all times.

To help keep traffic flowing during North Split construction, INDOT says it has invested more than $4 million to modernize and upgrade nearly 500 traffic signals, including the use of GPS synchronization.

The North Split was built in the late 1960s and is one of the most heavily traveled interchanges in the state. The renovation project was first announced in September 2017.