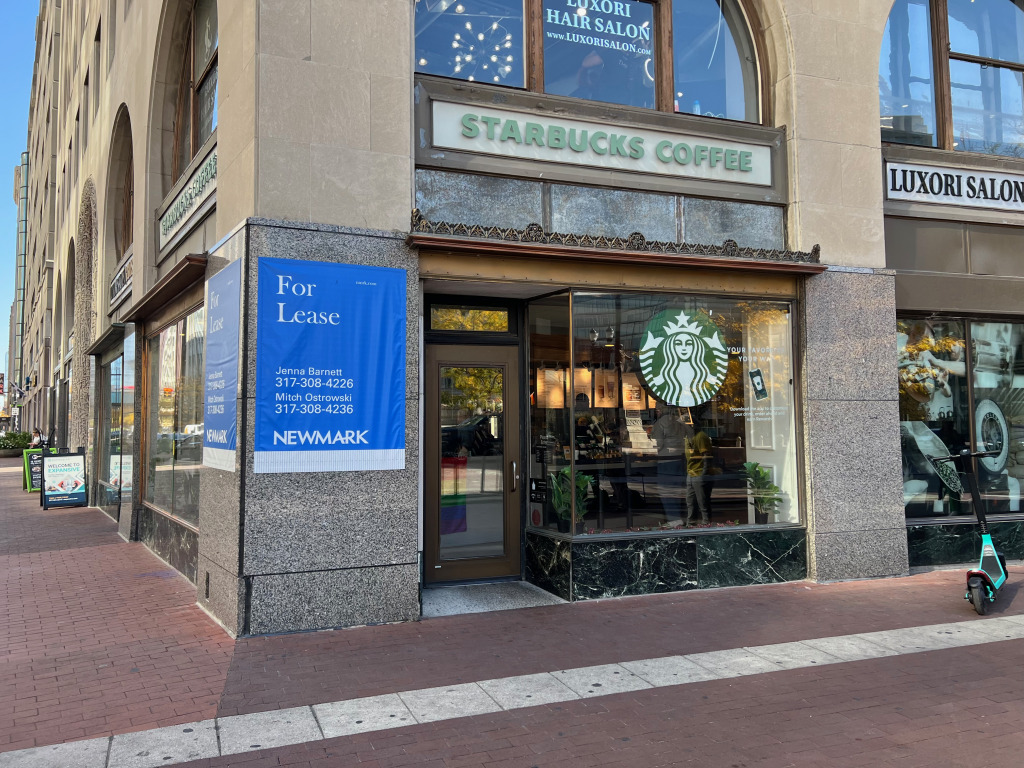 Starbucks confirmed Friday that it will close its store on Monument Circle on Oct. 28, saying that the company’s first priority “is to make sure our partners are safe at work.”

The company did not cite any specific incidents at the Circle Tower location at 55 Monument Circle, but it said in a statement that Starbucks will close a store when modifying store operations aren’t enough to make employees and customers feel supported.

The move comes several months after Starbucks CEO Howard Schultz posted a video to Twitter in which he said the company would close stores because of safety-related problems including crime, homelessness and drug use in restrooms. Starbucks announced plans then to close locations in Los Angeles, Seattle, Philadelphia, Washington, D.C., and Portland, Oregon.

In Indianapolis, local officials said crime has not increased recently downtown and that most of the reports it receives involve property crimes, not violent crime.

Commander Phillip Burton, who oversees the the Indianapolis Metropolitan Police Department’s downtown district, said Starbucks management did not alert the police about any increase in criminal activity or other problems.

“It is a shame that Starbucks did not communicate their concerns about any safety issues that they were experiencing to us,” Burton told IBJ. “We have a great relationship with so many of the businesses downtown.

“I’m constantly having our officers go in and just speak to the managers when they’re doing their foot patrols and the bike patrols, just take those few extra minutes just to see if they do have any concerns. And we were not made aware of any safety issues or concerns with Starbucks.”

Taylor Schaffer, the new CEO of Downtown Indy Inc., called the announcement “disappointing.” She said data indicates that downtown accounts for less than 5% of the city’s overall crime.

“We are committed to ensuring that residents and visitor alike feel safe in our regional center,” Schaffer said in a statement. “That’s why we are collaborating with the Indianapolis Metropolitan Police Department to prioritize investment in public safety initiatives including increased patrols, the instillation of new crime-fighting technologies, and engagement from Downtown Indy Inc.’s safety ambassadors.”

Overall, crime in Indianapolis is down compared with 2021. In a statement, Mark Bode, a spokesman for Mayor Joe Hogsett, said the city continues to work with IMPD and stakeholders “to keep downtown a safe and vibrant place to live, work, and play.”

But despite repeated assurances from city officials that downtown is safe, there has been a perception that the city’s central core has become more dangerous, especially since the start of the pandemic and after race-related riots in 2020.

Downtown businesses have complained about homelessness. And there are often people near the Starbucks sleeping on the sidewalk or on the monument itself. Panhandling is common nearby.

Burton said Starbucks employees were known to provide free drinks to homeless people. “And we believe this may have contributed to that environment of unease for their customers and employees,” he said.

Asked specifically about safety at the Monument Circle location, a Starbucks spokesperson sent the following statement:

“We routinely review the partner and customer experience in our stores, to see if the store is thriving, [employees] are feeling supported, and that we are meeting customer needs. Our local leaders are, and have always been, empowered to use the many resources at their disposal to modify store operations and create the best experience for our communities. But when necessary, we will make the decision to close a store.”

Cyndi Carrasco, the Republican running for Marion County prosecutor, jumped on the news about the Starbucks closure with a statement pointing out that Democrat Ryan Mears, who was appointed prosecutor and is seeking a full term, said this week, “Downtown is safe.”

“I wish this were the case,” Carrasco said. “Today, Starbucks announced they will be closing their location right on Monument Circle, the heart of downtown, due to safety concerns for their employees.

Citing citywide statistics—not downtown data—she said “violence throughout Indianapolis is out of control, and our once vibrant and thriving downtown is suffering. People are dying, and businesses are closing.”

Hogsett is seeking additional resources for the IMPD.

The City-County Council is expected to vote Monday on his proposed 2023 budget, which “features an unprecedented public safety investment that helps fund 200 additional IMPD officer positions, increases first-year officer pay, and continues to build out robust law enforcement technology,” Bode said. He could not say how many of those officers might be part of the downtown district, but he said that ” if we are successful in filling our budgeted positions, every IMPD district will see their officer ranks boosted.”

Starbucks said that employees affected by the Monument Circle closure will have a chance to transfer to a different Starbucks location.

Starbucks has six other locations within downtown’s mile square. Three are located inside hotels, one is in a Kroger, one is at 430 N. Massachusetts Ave. and the other at 414 W. Vermont, part of street-level retail at a Hampton Inn.

66 thoughts on “Starbucks on Monument Circle to permanently close”