If there were an MVP for local CEOs, David Simon would again find himself at or near the top of the list in 2012.

Simon Property Group Inc. in 2012 joined the Standard & Poor’s 100 Index, a listing of the nation’s largest and most established companies that includes Apple, Coca-Cola and McDonald’s. The Indianapolis-based company is the only real estate company on the list and is now the largest real estate company in the world. 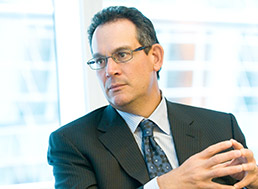 At a recent enterprise value of $71 billion as calculated by Yahoo Finance, Simon Property is worth more than Starbucks ($39 billion), Nike ($42 billion) and News Corp. ($64 billion)—three of the most prominent fellow members of the S&P 100.

And the Yahoo Finance figure actually understates the company’s enterprise value, a Simon spokesman told IBJ in May, since it excludes unconverted ownership units and recently issued debt.

David Simon’s savvy acquisition over the years of a portfolio of outlet malls helped make Simon Property Group the best-performing retail real estate stock of the last five years and prompted the hedge fund manager Bill Ackman to push for Simon to acquire rival General Growth Properties, a deal that did not materialize.

In recognition of the company’s blistering performance under David Simon’s watch (a 10-year return of more than 600 percent), the board in 2011 granted him $120 million in restricted stock. He can collect the full grant, on top of his regular compensation, if he stays with Simon until mid-2019.

Simon, son of company co-founder Mel Simon, has been CEO since 1995 and chairman since 2007.

His retention bonus was part of a controversial new contract Simon signed in July 2011, just months before he and his wife, Jackie, paid a cool $25 million for a full-floor, 7,500-square-foot abode at 625 Park Ave. in New York City, where he now spends a chunk of his time.

Investors holding 73 percent of Simon Property Group’s shares voted against the retention package in a symbolic 2011 vote. And one group of dissident shareholders filed a lawsuit challenging the deal, arguing it was more a bonus for past performance than an incentive structure for future performance.

The company’s shares have been on an elevator ever since: The shares traded around $115 apiece when the company re-upped with its chief executive. They had risen to $156 by mid-December.

A more than 35-percent return—before considering dividends—is good enough to silence quite a few critics.•