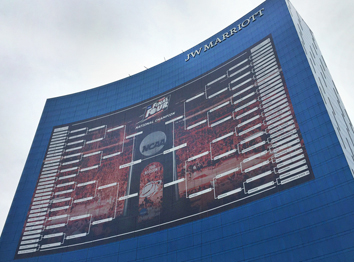 The JW Marriott hotel and Lucas Oil Co. are both getting big-time exposure from this weekend’s Final Four.

For the JW Marriott, most of March was a bonanza of publicity. Since the huge printed graphic displaying the NCAA men’s basketball tournament bracket was affixed to the building on the west side of downtown late last month, the 33-story tower—with the hotel logo clearly visible above the banner—has been viewed on almost every major television network and seen in scads of local and national print publications and websites.

Eric Smallwood, a Michigan-based sports sponsorship analytics expert, estimated that, by the time Monday’s championship game concludes, the JW Marriott will have earned $390,900 worth of exposure from the updateable sign.

That figure includes all exposure, live and through the media, Smallwood said. He based those figures in part on what it would cost to buy comparable time and space through those media outlets.

“It’s pretty incredible given that all of this value is driven by a banner hung on the side of a building,” Smallwood said. “Making it more incredible is the fact that it’s not a banner that carries any type of commercial message for the company.”

Of course, the strategic location of the hotel name looming above the bracket doesn’t hurt.

At 44,000 square feet, the bracket sign is the size of nine basketball courts and weighs two tons. It's 165 feet tall and 267 feet wide, and took 12 days to build and attach to the east side of the hotel. Designed and built by Indianapolis-based Sport Graphics, the bracket was honored Friday by Guinness World Records as the world's largest sports tournament bracket.

The JW Marriott is the host hotel of the NCAA during the Final Four.

The exposure the JW Marriott is getting is likely less than what it got during the 2012 Super Bowl, when it a erected a huge sign of the Lombardi Trophy in advance of the big game at Lucas Oil Stadium. Smallwood calculated in 2012 that JW Marriott got more than $250,000 from brand exposure during Sunday’s Super Bowl telecast alone.

While the JW is arguably the surprise winner of the Final Four branding derby, it is not the biggest winner.

Smallwood estimates California-based Lucas Oil Co., which has the naming rights to Lucas Oil Stadium where the Final Four games are being played, will earn $15.8 million in exposure from this weekend’s and Monday’s games and surrounding activities.

That’s slightly less than the $17 million Smallwood said AT&T got from last year’s Final Four in its namesake stadium in Dallas.

Smallwood said AT&T got a bit more exposure because its name is placed prominently on the huge indoor scoreboard at the Dallas venue.

But overall, Lucas Oil Stadium has a good signage presence, he said. And poorly placed signage can definitely hurt the value for a naming-rights sponsor.

Smallwood calculated that Mercedes-Benz got only $7.1 million worth of exposure when New Orleans hosted the Final Four in 2012 because the former Louisiana Superdome had just rebranded itself with the Mercedes-Benz moniker. He said the Mercedes-Benz signs were not posted strategically to get picked up on camera during the TV broadcast.

While Lucas Oil got a big bounce, it didn’t get as much exposure as it did during the 2012 Super Bowl. During that event, Smallwood calculated the company earned $33.8 million in branded media value from NBC’s broadcast alone.

“The cost of TV advertising during the Super Bowl is so much higher—and that’s because there are so many more people watching—it’s just hard to compete with that event in terms of sheer exposure,” Smallwood said.

Still, this year has proven to be a solid value for Lucas Oil.

The University of Wisconsin's win over undefeated Kentucky drew the most TV viewers for an NCAA men’s basketball tournament semifinal in 19 years.

The Badgers’ 71-64 victory Saturday night averaged 22.6 million viewers across TBS, TNT and truTV, according to Turner Sports and CBS. That’s up 39 percent from last season’s matchup of the same teams.

In 2008, native Hoosier and company founder Forrest Lucas paid $121.5 million for a 20-year naming-rights deal for the Indianapolis Colts’ new home stadium. The average annual payment of Lucas’ deal is less than $6.1 million.

“They’re getting considerable value from the Colts games,” Smallwood said, “but big special events really drive the value of naming-rights deals up.”