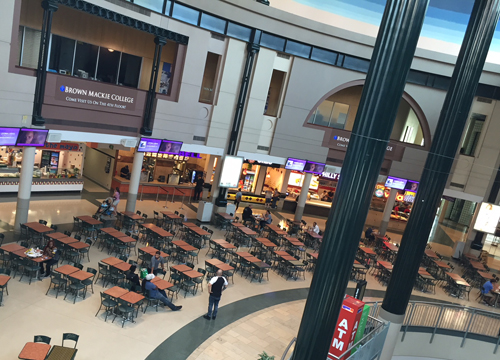 Struggling Circle Centre mall is about to undergo a multimillion-dollar renovation that owners say will bring a fresh, contemporary look to the 23-year-old downtown shopping destination that’s losing its sole remaining anchor store.

“Since opening in 1995, Circle Centre mall has always been an integral part of the downtown community with its mix of downtown workers, residents and visitors to our great city,” said Audrie Thompson, Circle Centre’s general manager, in a press release. “This comprehensive renovation positions us for future growth and the next phase of the property’s evolution.”

Largely focused on upgrading finishes such as flooring and lighting, the improvements are mostly cosmetic and fail to address the long-term viability of the mall as a shopping center as consumer shopping habits change. The plans also don't address some speculation from Simon in 2015 that parts of the 800,000-square-foot property could be redeveloped for other uses, such as housing or convention space.

Circle Centre has lost more than a dozen large and small tenants in recent years. The biggest shock came in 2011 when high-end retailer Nordstrom, one of the mall's original anchors, announced it would close its three-story store on the mall's south end.

Seven years later, Simon has mostly filled the former Nordstrom space with an assortment of restaurants—including Yard House, Nada, Punch Bowl Social and Burger Study—and the offices for the Indianapolis Star. All can be accessed from street level, a big advantage in attracting patrons.

The latest big blow came Jan. 31, when the owner of the department store chain Carson’s announced it was closing its three-story location on the north end, leaving the mall without an anchor tenant.

Owners of the mall said in the Monday release that one of the most visible components of the renovation would be the transformation of the food court into a dining pavilion—a transition that will include new lounge areas, banquet seating and community tables, in addition to new televisions, lighting and flooring.

Other planned improvements include:

— remodeling of restrooms, including new finishes, floors and fixtures
— new lighting and way-finding signage in the mall and adjacent garages
— new flooring in various areas, including at mall entrances and the south rotunda corridor
— upgrading finishes in the new Georgia Street Court and a new connection to Meridian Street on the southeast side of the property
— modernizing the glass elevators on the north end of the mall
— adding a fresh, bright color scheme throughout the property
— refreshing the Arts Garden façade, including new lighting above the intersection of Washington and Illinois streets

It’s unclear exactly how much owners will spend on the improvements. The press release described the project as a “multi-million-dollar renovation,” but a spokesman for Simon declined to provide a specific figure.

When Simon proposed a series of improvements to the mall in September 2015, parties briefed on the plan said the upgrades would run roughly $20 million. The proposed changes from 2015 stalled, but many of the improvements announced at the time now appear on the current list.

Meanwhile, the loss of Carson’s will leave a gaping hole at the high-traffic-intersection of Meridian and Washington streets And troubles continue inside the mall as well. Godiva Chocolatier is set to close on Feb. 25, and Andrews Jewelers shut down in late January, adding to the growing vacancy.

The fate of the mall is of vital interest to the Indianapolis mayor's office. The retail oasis was considered a linchpin in downtown's revival as a destination for shopping, nightlife and tourism. The city is a major investor in the mall and still owes $54 million in principal and interest on $187 million in bonds it took out in the 1990s to help fund the project.

Mayor Joe Hogsett's staff has been meeting with mall investors in recent weeks to determine how best to pitch the property going forward. Chief of Staff Thomas Cook told IBJ last month that city officials have been encouraging stakeholders to think futuristically about what could work best for the next two decades.

“Thanks to innovative use of space and the addition of street-level restaurants, Circle Centre continues to be a profitable asset and a critical hub for residents and visitors alike," Jones said. "We look forward to working with the Partnership and Simon Property Group to ensure the continued success of this key downtown destination.”

The city is not contributing any funds to the renovation project, according to a city spokeswoman.