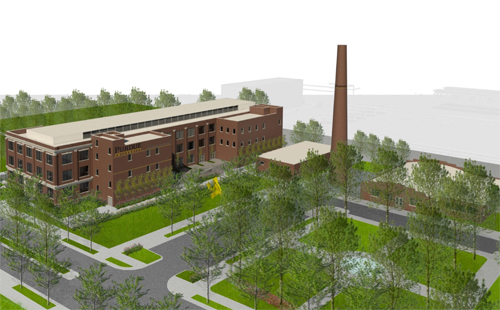 The long-vacant P.R. Mallory building on East Washington Street is closer to becoming occupied, after plans to bring the Purdue Polytechnic High School there stalled over higher-than-expected renovation costs.

The Department of Metropolitan Development on Wednesday is set to transfer ownership of the main administration building to the city’s redevelopment arm, Renew Indianapolis Inc.

In turn, it will sell the four-story, 120,000-square-foot structure to the Englewood Community Development Corp. and John Boner Neighborhood Center. Their plans call for a $30 million redevelopment that would house the Purdue high school, in addition to a middle school for the Paramount School of Excellence.

“In October 2016, Mayor Hogsett stood on the site with [Purdue University President] Mitch Daniels to say they would like to put a charter school there,” said Jeff Bennett, the city’s deputy mayor of community development. “But it’s been fits and starts to get construction started.”

The university had chosen the city-owned property in the 3000 block of East Washington Street for the school designed for STEM-related fields and to serve as a pipeline for students to Purdue.

The school is viewed as a catalyst for helping rejuvenate the Englewood area, which the Local Initiatives Support Corp. of Indianapolis named as one of six neighborhoods targeted by its Great Places 2020 initiative.

But in February 2017, and just four months after the initial announcement, Purdue Polytechnic instead signed a lease to occupy space in The Union 525 building at 525 S. Meridian St. downtown. The change of heart came after Purdue officials concluded the tab for renovations would have been millions of dollars more than anticipated.

Purdue, which would have master-leased the building from the city, was willing to spend up to $4 million to renovate the structure but needed an additional $5 million to $7 million from outside sources to repair its exterior, a school official told IBJ in February 2017.

Now the Englewood CDC and John Boner Community Center are stepping in to buy the building and are proposing to finance the $30 million redevelopment, which also includes a roughly $1.5 million purchase price for the building.

The P.R. Mallory property has quite a storied history. The Indianapolis Indians played there, at East Washington Baseball Park, from 1902-1905, and the Wonderland Amusement Park followed from 1906 until a fire destroyed it in 1911.

General Electric constructed the 120,000-square-foo  administrative building as a regional headquarters but never occupied it and instead sold it to the P.R. Mallory company.

“It’s been a great place and sort of an anchor for our neighborhood,” said Joe Bowling, co-director of the Englewood CDC. “That’s the history, and we see it as the future.”

At its height in the 1960s, the P.R. Mallory building employed 1,500 workers making dry cell batteries. Employment began to decline in the 1970s as Mallory sold off various business units.

What remained on the site was CMW Inc., which bought Mallory’s electrical-contact manufacturing operation in 1978. CMW, which also produces high-density metals and welding products, employed about 100 people in buildings formerly part of the Mallory complex. Those buildings are south of the four-story structure now set for a major facelift.

The sale of the administrative building should close by the end of the month, Bowling said. The Englewood CDC and the Boner center are buying it through the jointly owned PRMallory LLC entity.

The expected purchase price of $1.5 million is what the building has been appraised for, and paying that amount will help the buyers secure federal tax credits, Bowling said.

Asbestos and lead removal should begin soon, he said, with construction finishing in July 2019, in time for the start of the school year.

Paramount, at 3020 Nowland Ave. near Brookside Park on the near-east side, is a K-8 charter school. It plans to open a middle school at the P.R. Mallory site.

At the rear of the P.R. Mallory site sits what’s known as the Bunker building. The Englewood and Boner Center team ultimately hopes to refurbish that structure as well, at a cost of about $2.2 million.

Plans call for Farm 360 to expand into the building. Farm 360 is an 8,000-square-foot, for-profit hydroponic farm operated by Englewood at 201 S. Rural St. that aims to help people access healthy food in urban neighborhoods.

The entire $32 million redevelopment would be financed through loans and tax credits, including $9.9 million from a traditional bank loan and more than $11 million from federal new markets and historic tax credits.