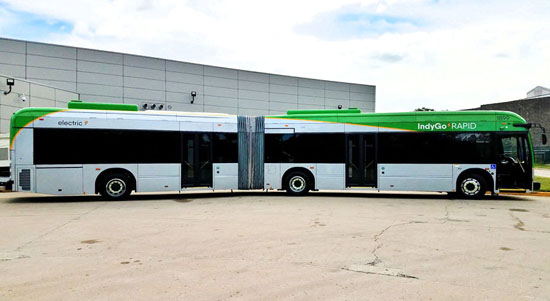 IndyGo has taken delivery of the first of 13 electric buses that will serve the Red Line route, and the transit system has already begun performance testing and employee training on the vehicle.

The testing will help IndyGo answer a key question: Whether the charging range for the vehicles will meet the system’s expectations.

China-based manufacturer BYD Co. Ltd. (BYD is an acronym for Build Your Dreams) is building the vehicles at its facility in Lancaster, California. It delivered the 60-foot battery-powered bus to IndyGo on Sept. 1, said IndyGo spokeswoman Lauren Day.

When it ordered the buses last summer, IndyGo specified that the vehicles needed to have a range of at least 275 miles per charge. Day said IndyGo expects that the buses will be able to run their routes each day on a single charge.

The company said the per-charge range on the bus is expected to be from 278 to 300 miles.

But Albuquerque, New Mexico, which ordered the same model of BYD buses for its own rapid-transit line, found the vehicles’ range fell far short of expectations, according to an investigation by the L.A. Times.

BYD Vice President Bobby Hill said the Indianapolis bus will be an upgrade from the Albuquerque version, with liquid-cooled batteries that provide more consistent charging ranges.

“We anticipate no issues” with the expected charging range of the IndyGo buses, Hill said.

The BYD vehicle will “likely not” go into passenger service until the Red Line is completed, Day said, but drivers will be taking the vehicle out on the road for performance testing. That testing will involve running the buses in a variety of weather conditions while carrying loads of sandbags meant to simulate the weight of passengers.

Driver training is important, Day said, because drivers need to know how to properly operate the electric buses to get maximum ranges.

The vehicles have a regenerative braking system that generates electricity when the driver applies the brakes, helping to extend the vehicle’s charging range. And using the heater at full strength on cold days reduces the vehicle’s range.

BYD says it is the world’s largest manufacturer of electric vehicles and batteries, with more than 35,000 buses in service in 50 countries. But the 60-foot electric bus is a new product for the company, which is just getting a foothold in North America. To date, BYD says, it has sold more than 650 buses, 270 of which have been delivered to customers.

Albuquerque, Indianapolis and Lancaster, California, were the first U.S. transit systems to order the 60-foot electric buses from BYD.

The other 12 vehicles should arrive between the end of this year and the second quarter of 2019, Day said.

Red Line construction is expected to be complete in spring 2019.