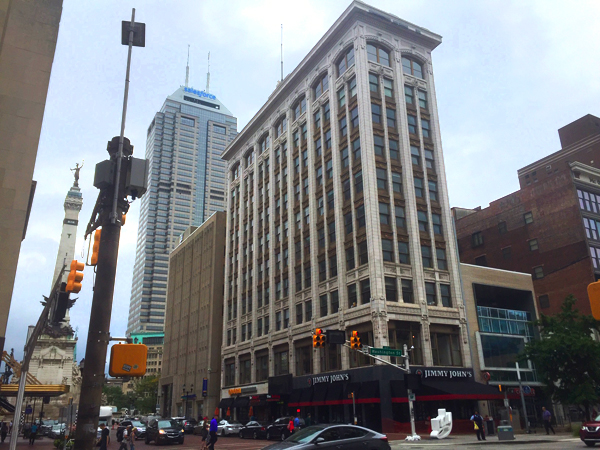 The new owner of downtown’s King Cole building at 1 N. Meridian St. plans to turn the 104-year-old edifice into a hotel, following the lead of several other owners of historic buildings within just a couple of blocks.

An entity named Indy Propco LLC purchased the King Cole building in January from West Coast Properties LLC for $3.9 million. According to the sales disclosure form filed with the state of Indiana, the intended use for the building is as a hotel.

According to those plans, crews will remove all existing flooring and ceilings, as well as plumbing, electrical and mechanical equipment on all floors of the building.

Built in 1915, the 11-story building on the northeast corner of Meridian and Washington streets houses restaurant tenants Jimmy John’s and Qdoba on the first floor and a Cajun/Creole seafood restaurant, The Boiling, in the basement.

The upper floors have been occupied by a variety of tenants including Kuaba Gallery, a beauty salon, and a number of small businesses. Several tenants told IBJ that they have either already moved out or have been asked to vacate by the building’s owner.

Indy Propco LLC is a limited liability corporation registered in the state of Delaware. The LLC’s listed address, 55 W. Wacker Drive in Chicago, is also the address for The Gettys Group, a hospitality-industry developer that also handles interior design, branding and procurement.

The Gettys Group declined to comment about the King Cole project.

According to the Gettys Group website, the 31-year-old firm has completed more than 1,000 projects across the U.S. and overseas, and it works with more than a dozen different hotel brands including Ritz-Carlton, Marriott, Hilton Worldwide, Hyatt, Radisson and Holiday Inn.

The permit issued by the city lists Deep Cove Partners as the building’s owner, with an address of 300 N. LaSalle St. in Chicago—the same address as Waud Capital Partners LLC. Mark Flower, chief operating officer at Waud Capital, is listed on the state sales disclosure form as a representative of Indy Propco LLC.

Flower did not respond immediately to phone and email messages sent Tuesday morning.

But Deep Cove Partners and The Gettys Group are partnering on a TownePlace Suites by Marriott project in Nashville, Tennessee, according to news reports from the Nashville Business Journal and the Nashville Post.

The owner will be climbing on a crowded bandwagon of developers planning to convert some of downtown’s oldest office buildings into hotels.

Indianapolis-based developer Loftus Robinson recently was given the green light by the Indianapolis Historic Preservation Commission for alterations it has proposed to the former Odd Fellows Building at 1 N. Pennsylvania St., which will be converted into a Kimpton hotel.

According to a document filed with the U.S. Department of the Interior’s National Register of Historic Places, 1 N. Meridian St. was designed by the architectural firm Vonnegut, Bohn & Mueller and built as the headquarters for the Kahn Tailoring Co.

A restaurant known as the Seville Tavern operated in the building’s basement from 1929 until 1957, when the space became home to upscale restaurant King Cole. Although that restaurant closed in the mid-1990s, 1 N. Meridian St. is still known as the King Cole building.