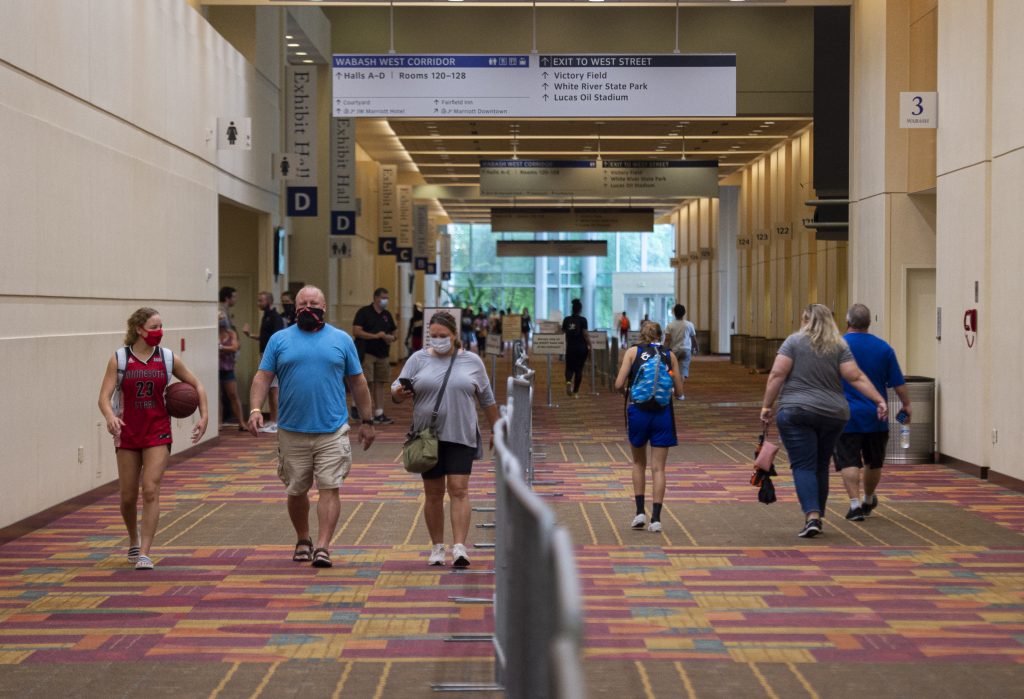 People walk down a hallway inside the Indiana Convention Center during the Nike Tournament of Champions girls basketball event on Wednesday, July 8, 2020. (IBJ photo/Mickey Shuey)

Conventions and other events have lured nearly 40,000 people to downtown Indianapolis since the beginning of July despite ongoing concerns about the COVID-19 pandemic.

The tourism activity—largely driven by weekend youth basketball tournaments and a couple of watered-down events at the Indiana Convention Center that were scheduled prior to the arrival of the coronavirus—has generated about $20.6 million in economic impact for the city.

Indianapolis is one of the few places in the United States that has regularly hosted conventions with more than a few hundred people this summer. Many other major convention centers have kept their calendars clear through at least September, with some seemingly shut down until nearly the end of the year.

Chris Gahl, vice president for Visit Indy, credited extensive upgrades to the convention center’s health and safety standards for being able to safely bring visitors to the facility.

“The $7 million in new health and safety upgrades to the Indiana Convention Center are catching the attention of event and meeting organizers,” Gahl said in written comments. “Each successful meeting hosted in Indy gives confidence to additional event organizers, while also moving our city closer to recovery.” 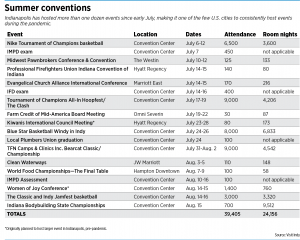 The upgrades include new hospital-grade filters for the facility’s air conditioning system, new touchless sensors for light switches and other mechanisms, and a rigorous deep-cleaning system that regularly sanitizes high-touch surfaces.

For example, the facility is working closely with the Performance Racing Industry to complete a safety plan for the group’s December trade show. It also helped the Nike Tournament of Champions—the first of several youth basketball tournaments—to welcome players and a limited number of fans for a weeklong event in early July that did not result in any newly reported COVID-19 cases.

“Our events team has proven it is possible to host successful events during the pandemic with temperature checks upon entry, mandatory masks, enhanced sanitation efforts, and other health protocols,” said Andy Mallon, executive director of the Capital Improvement Board, which operates the convention center, in written remarks. “While the uncertainty of the coronavirus makes it more challenging, we are confident we can host other events going forward.”

Most of the events have been held at the convention center, although some have taken place in downtown hotels like the JW Marriott and the Westin.

Ten of the events were originally scheduled for other cities—including Chicago—but moved to Indianapolis because the initial host city could not accommodate them.

Groups like Women of Joy and Kiwanis International had been planning to host full events in Indianapolis this spring or summer before the pandemic began, but they were forced to postpone. Instead, each group held socially-distanced, less-crowded functions over the past few weeks.

The next event on the convention center’s calendar is the GameStop corporate convention, scheduled for Aug. 29-Sept. 2, which had been expected to bring in 6,800 people. It’s unclear how many people will now attend.

A handful of small to midsized events are also still on the calendar through the rest of the year, although the largest events of the autumn and winter—National FFA and the Big Ten Football Championship Game, respectively—have been canceled.

The success of weekend conventions has helped bolster downtown hotel occupancy since early July. According to data from Nashville, Tennessee-based hotel research firm STR, Indianapolis has had the third-highest hotel occupancy rate on Fridays and Saturdays in the United States since July 6, at 52%.

Oklahoma City was first, at 60%, because of its success in attracting youth events, and Milwaukee was second, at 54%, because the Democratic National Convention generated some activity before it was converted into a virtual event.

Gahl said the downtown hotel market has benefited from the “You’ve Earned It” in-state marketing campaign by the city and Visit Indy, which began in early July. The $1 million campaign includes television, radio and digital advertising meant to draw in Hoosiers looking for weekend getaways to downtown Indianapolis.

The campaign has generated an estimated $692,000 in additional visitor spending (including travel costs, hotel rooms and restaurants and retail) and is expected to run through the end of September. The city has so far spent about $400,000 on the campaign.