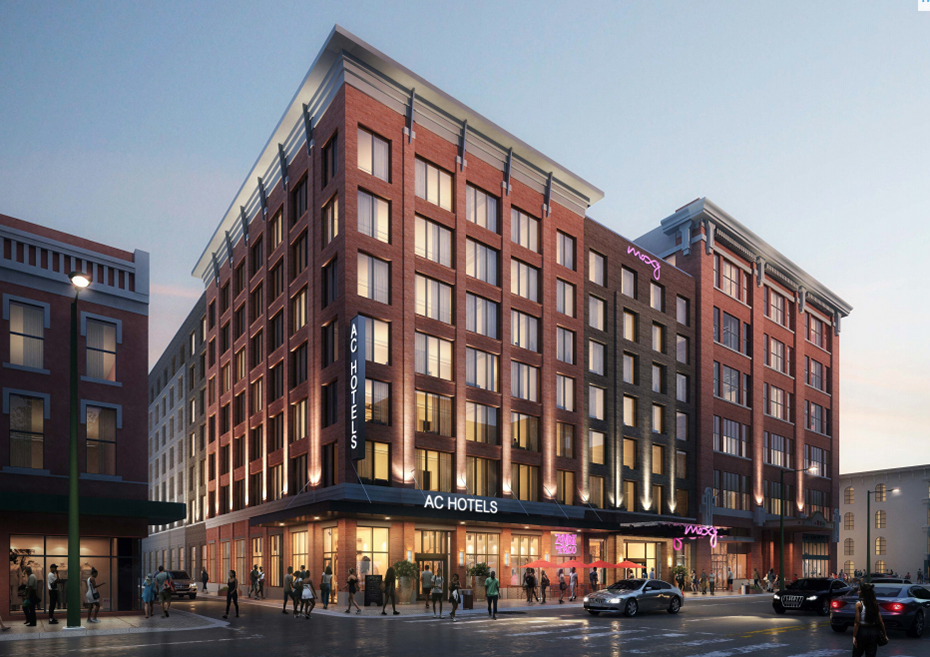 A rendering of the dual Moxy-AC Hotel development by White Lodging and REI, looking south on Meridian Street. (Image courtesy of the city of Indianapolis)

Developers White Lodging and REI Real Estate Services plan to spend $50 million to construct the hotel at 125 S. Meridian St. The building would be split between a Moxy and an AC Hotel—a pair of Marriott brands focused on millennials and business travelers.

The IHPC unanimously voted to approve several requests for the project, including actual construction of the seven-story, 99,000-square-foot hotel, along with signage, facade lighting, outdoor seating and a roof overhang.

The commission has jurisdiction over the hotel site because it is in the historic Wholesale District.

IBJ first reported on the planned hotel in June.

The development—which will not have any on-site parking—is expected to have 206 rooms, though Ryan Wells, director of development for REI, said the exact split between hotel brands hasn’t yet been finalized.

Earlier plans for the project filed with the city call for 104 rooms for the Moxy and 102 rooms for AC Hotel.

The development is also expected to feature a walk-up taco stand, between the hotels, called Zombie Taco.

White Lodging introduced the concept as part of a Moxy hotel development in Chicago in 2018. Its menu includes tacos, burritos and nachos. The Zombie Taco in Chicago also features an extensive beer, wine and cocktail list.

The stand would allows customers to order food from inside the Moxy or from the sidewalk and features both indoor and outdoor seating.

After a preliminary hearing on the overall project in August, the development team flipped the locations of each hotel within the building, moving the AC Hotel to the northern portion of the property and the Moxy to the south.

Several other minor changes were also made to the hotel’s design, including updates to construction materials, brick color and signage elements.

Moxy guests would check in at its bar, which would feature game tables and a large lounge area. It’s one of Marriott’s most millennial-focused brands.

AC Hotel is a more European-inspired brand—it originated in Spain before being bought out by Marriott—and has more minimalist finishes.

The price points for each hotel are expected to be different, with rooms at the Moxy starting around $150 per night and rooms at AC Hotel beginning around $170. Downtown Indianapolis convention hotels typically start at about $200.

Wells said the 0.46-acre parcel on which the project would be built is under contract, with the sale expected to close in early 2020. The purchase of the land was contingent upon the IHPC’s approval of the hotel and is expected to be finalized by the end of the year.

Construction on the hotel is expected to start in spring 2020, he said.

REI and Merrillville-based White have partnered on developments for each brand in other cities, including Louisville, Austin and Denver.

The Moxy/AC Hotel project is one of several that has been announced for downtown in recent months. Other recently announced projects on the south side of downtown include an Avid hotel at 324 Wilkins St.; an Even Hotel at 808 S. Meridian; and a Cambria hotel at 850 S. Meridian St.

Indianapolis-based developer Loftus Robinson recently was given the green light by the IHPC for alterations it has proposed to the former Odd Fellows Building at 1 N. Pennsylvania St., which will be converted into a Kimpton hotel.

Bruce Bodner, who owns Morrison Opera Place, 49 S. Meridian St., said in September he is asking the IHPC for approval of a $60 million project, turning that building into a mix of residential units and a hotel.

Atlanta-based firm PFVS is the architect on the Moxy/AC Hotel project.