About a year after deciding not to campaign for president of the United States, Gov. Mitch Daniels agreed to become the next president of Purdue University. 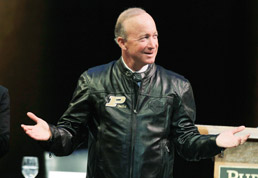 The Purdue University board of trustees gave Gov. Mitch Daniels a leather jacket at the June press conference introducing him as the college's new president. (AP photo)

After the Purdue trustees decided not to renew the contract of Purdue’s previous president, France Cordova, they turned to Daniels to help navigate a higher education funding environment that is more challenging than ever.

Daniels will need to moderate costs for students while at the same time ramping up Purdue’s research enterprise.

“Higher ed in general in this country is a business model that looks shaky,” Daniels told the Journal and Courier of Lafayette in March. But, he added, “There is no reason in a few years Purdue should not be mentioned when someone talks about Cal Tech or MIT,” referring to the California Institute of Technology and Massachusetts Institute of Technology.

He will need to do even more at Purdue as state support has not been keeping up with inflation—and that was even before Daniels himself cut higher education funding by $180 million.

Many politicians are eager to watch when Daniels appears before state legislators to ask for Purdue’s next round of state funding.

Also interesting will be Daniels’ interactions with Purdue faculty—many of whom are wary of his dismantling of the state employees’ union and his business-like approach to education.

While many Purdue alumni—especially business leaders—were unhappy with Cordova, Purdue reached new heights under her leadership.

Annual research awards set records by topping $400 million in 2010 and 2011. SAT scores of incoming Purdue students are higher than ever. Cordova cut $67 million out of Purdue’s operating budget and raised $1 billion—in the middle of a recession and market meltdown.

But with tuition up 145 percent in the past decade, Daniels will have to try new approaches to keep the Boilermaker train chugging.•