A crowdfunding campaign for an Indiana pizzeria that came under fire after its owners said their religious beliefs wouldn't allow them to cater a gay wedding has raised more than $840,000. 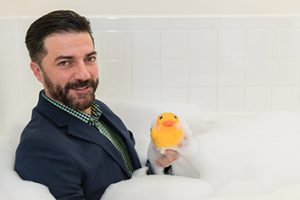 Two Carmel-based entrepreneurs created Edwin the Duck, which they bill as the world’s first interactive rubber duck. The prototype has already piqued the interest of Amazon, Bed Bath & Beyond and other retailers, the inventors said.

A Fishers-based tech startup in the home-services industry said Tuesday that it has raised $1.03 million in venture capital, including seed funding from a pair of well-known Indiana investment groups.

When I started my first company, Bio-Storage Technologies, back in 2002, raising angel capital was time-consuming and inefficient, and the results were mixed at best.

The Indianapolis-based expo for featuring innovations and courting potential investors crowned an unusual winner of its pitch contest on Thursday.

West Coast investor Parker Hinshaw and his wife, Jean Balgrosky, in 2012 founded San Diego investment firm Bootstrap Incubation LLC and in 2013 the Bootstrap Venture Fund, which have funded three Indiana companies in less than a year. A fourth deal is about to close.

Breweries turn to outside investors to underwrite growth

Six breweries and two distilleries in Indiana have sought outside investments since January 2013, a few of them multiple times, federal records show. That’s up from just one brewery in both 2009 and 2010.

The online investing marketplace Localstake brokered a little more than $1 million in private investments for an Indiana distillery and a solar-heating startup in 2013, through crowd-funding. Instead of receiving a T-shirt or other novelty for their money, as with typical crowd funding, contributors received an actual stake in the business.

An emerging network of angel investors from around the state will team with Indiana University next month on a workshop that will put them in the same room with entrepreneurs who’d like their backing.

Venture capital surged in the first half of 2012, to $51.6 million in Indiana. But the pace of activity here fell off sharply in the second half of last year, and remained sluggish into 2013.

A growing number of small game companies will join a pantheon of industry titans starting Aug. 15 at the Gen Con Indy gaming convention. The small guys are there largely because they can get the money they need to keep themselves alive via the fundraising technique known as “crowd funding” or “crowd sourcing.”

New fund is one of few in the nation focused on minority businesses.

You certainly don’t want to keep paying a mortgage if it restricts your business in other areas. But you don’t want to cough up too much at once and have the same effect.

Infuse Accelerator hopes to make early-stage investments in 12 to 15 companies a year.

Getting $50,000—often from friends and relatives—to develop a product and set up a company still is easy enough in Indiana, small-business leaders and venture capitalists say. But once a firm needs a few million dollars to grow into a revenue-generating operation, the area can’t compete with Silicon Valley’s magnetism for venture capital.

The Indiana University School of Medicine has launched 12 companies in the past 18 months—a burst of startup activity the school has never seen before.