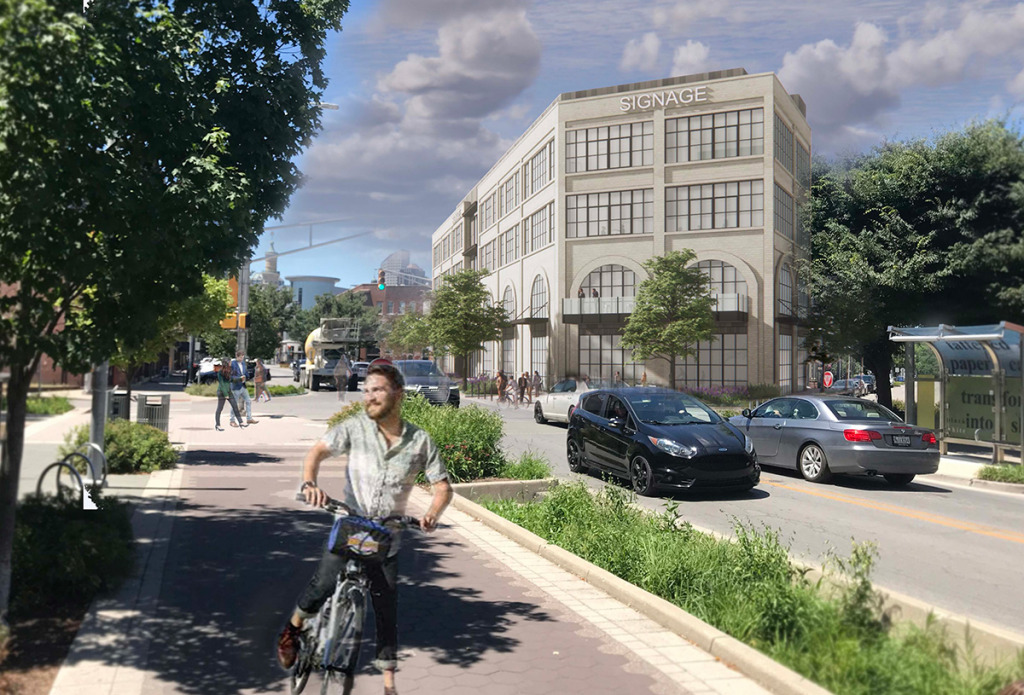 The developers of the project at 646 Massachusetts Ave. hope to land a signature tenant to make most of building. (Rendering courtesy of Newmark)

Stenz Construction Corp. and Third Street Ventures LLC are partnering on the project, expected to encompass nearly 37,000 square feet at 646 Massachusetts Ave. on the northwest corner of the street’s intersection with Park Avenue.

The development team hopes to land a single office tenant to occupy most of the building, although the first floor could also consist of retail or other commercial uses.

“A lot of companies are looking to differentiate themselves, and this gives them the opportunity for signage in a key location in the heart of Mass Ave,” said Jenna Barnett, executive managing director of the Indianapolis office of real estate brokerage Newmark. Barnett is representing Stenz and TSV on leasing the property and spoke to IBJ on the companies’ behalf.

“It presents a great opportunity for a company to bring their presence to Mass Ave,” she said.

Stenz for several years has sought to redevelop the corner, which currently is home to a two-story, multitenant office building.

Stenz has owned the property since late 2017, purchasing it for $1.4 million through holding company 646 Mass LLC from the owners of Dean Johnson Design Inc., which occupied the building at that time.

The existing building was announced in 2016 as the future home of the Kurt Vonnegut Museum and Library, but the project was abandoned due to construction issues.

In 2018, Stenz announced plans for a four-story condominium building on the site, but that development never got off the ground, either.

For the new project, the developers intend to raze the current building. The new proposal will require approval from the Indianapolis Historic Preservation Commission, but Barnett said that won’t be sought until it has a commitment from an anchor tenant and a final use has been determined.

She said construction on the project—a development cost for which has not been disclosed—is expected to begin soon after a lease for at least 20,000 square feet has been secured. Each floor is expected to be about 9,200 square feet, and there will be limited parking on-site, mostly to serve a would-be tenant’s executives.

Barnett said rent for the office portion of the building will be “in the mid $30’s per square foot,” but that could vary based on the structure of the lease.

Bottleworks has had success in developing and leasing office space even since the pandemic began, with work now underway on the second phase, including a triangular building that will be home to Lumina Foundation and several other companies. The Bottleworks project also includes a boutique hotel, several restaurants, a food hall and a movie theater, as well as space reserved for residential development.

Across the street, the owners of the Jungclaus campus are planning to redevelop the property in a similar but smaller fashion with courtyards, residential units and new office and retail space.

“Mass Ave has been a hot market for a very long time,” Barnett said. “In the past there has been very limited office space available on Mass Ave, but the demand has been consistently high.”

Delv Design is the lead architect on the project.