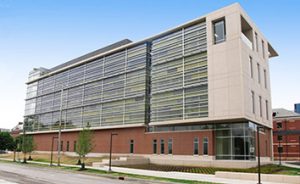 Since 2008, the Indiana University School of Medicine’s Department of Ophthalmology has seen nine physicians depart—nearly half its clinicians who care for adult patients.

When Dale Chihuly’s work is among the least interesting pieces on display, you know you’ve got a strong glass art show. Such is the case with Indianapolis Museum of Art’s “Masters of Contemporary Glass: Highlights from the Marilyn and Eugene Glick Collection.”

Gene Glick was a soldier, a builder and a philanthropic giant

Gene Biccard Glick, who died at home following a long battle with Alzheimer’s disease, built affordable housing sprawling across 10 states—a business empire that paved the way for tens of millions of dollars in donations to causes ranging from medicine to recreation.

Eugene Biccard Glick built a fortune as a residential real estate developer before becoming better known as one the city’s most generous philanthropists. The Indianapolis native and World War II veteran died Wednesday.

Marianne Glick’s community commitment has earned her the distinction of being named the 20th recipient of IBJ’s Michael A. Carroll Award, given annually to someone who has demonstrated the former deputy mayor’s qualities of determination, humility and devotion to the community.

After more than a decade of planning, The Indianapolis Cultural Trail will have its official ribbon cutting May 10 with a coming-out party on May 11. And that’s when boosters and skeptics alike will be watching to see what exactly Indianapolis is going to do with its difficult-to-grasp landmark.

The Glick Fund has doled out more than $2.5 million in grants to 37 Indianapolis-area organizations, the Central Indiana Community Foundation, which manages the fund, announced Wednesday.

Marilyn K. Glick, who with her husband Gene B. Glick donated millions of dollars in recent years to civic projects such as the Indianapolis Cultural Trail, died of cancer Friday at the age of 90.

The defamation case filed by former CEO Jeffrey Miller now has 17 defendants, many of whom are accused of posting disparaging comments on websites.

A $10 million research endowment at the Eugene and Marilyn Glick Eye Institute has attracted seven new researchers to the Indiana University School of Medicine’s Ophthalmology Department.

After pledging $62 million for a series of high-profile capital projects in and around Indianapolis, Eugene and Marilyn Glick’s charitable foundations are changing directions, making programs and services their top priority.

JA working its way out of real estate troubles

The new home for the Eugene and Marilyn Glick Eye Institute that&rsquo;s rising from the ground at IUPUI must do a lot
of things well.

Indiana has its share of renowned dead writers, but the Indianapolis-Marion County Library Foundation is planning to recognize modern-day Hoosier scribes with a new and quite hefty prize.

It can be intimidating to be tapped by a legend and charged with growing one of central Indiana’s best-known companies. But
David Barrett, three weeks into his role as executive vice president of Gene B. Glick Co. and less than half the age of its
still-working founder, says he isn’t the least bit nervous.