This photo from 1935 shows the crowd on the Midway. Snow cones were sold for 5 cents.

About six months after the allies in World War I signed an armistice with Germany, soldiers returned home to Indianapolis. The city held a Welcome Home Day on May 7, 1919, with a day-long celebration that included a parade and family reunions. A victory arch, a replica of the Arc de Triomphe in Paris, was […] 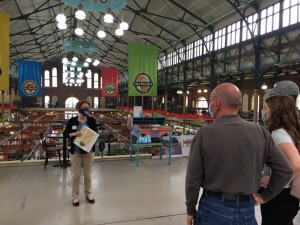 Some local museums and cultural institutions say they saw a bump in visitation over the weekend related to March Madness. Meanwhile, the attractions are playing up their basketball connections in a bid to attract visitors.

The Indianapolis Brewing Co., which was founded in 1887 with the merger of three local breweries, was once one of the nation’s largest breweries.

A crowd lines up outside the Indiana Theatre on June 14, 1944, to see the film “Home in Indiana,” a Henry Hathaway-directed movie about horse racing in Indiana. The film had its world debut in Indianapolis, and one of its stars, Jeanne Crain, visited Indiana for the premiere and to support local war-bond drives. The […]

The monument on Monument Circle is Indiana’s official memorial to Hoosiers who fought in the Revolutionary War, the War of 1812, the Mexican War, the Civil War, the Frontier Wars and the Spanish-American War.

Memory Bank: Crowd gathers on the Circle for FDR’s first run in 1932

In his first presidential campaign, Democrat Franklin D. Roosevelt, who was governor of New York at the time, made a stop in Indianapolis on Oct. 20, just days before the 1932 election, which was taking place in the middle of the Great Depression.

In this photo from 1916, fans of poet James Whitcomb Riley gather outside his home to pay their respects after his death.

The Marion County Courthouse was completed in 1876 at 200 E. Washington St.

Wheeler Mission was founded in 1893 under the name Door of Hope and led by William V. Wheeler, a hardware salesman who volunteered his time.

While campaigning in Indianapolis on April 4, 1968, for the Democratic nomination for president, U.S. Sen. Robert F. Kennedy of New York, broke the news of Martin Luther King Jr.’s assassination.

Memory Bank: Celebrating the end of the war

In this photo, Hoosiers came to Monument Circle for what the photo’s caption describes as an impromptu celebration.

Memory Bank: Booth Tarkington at his desk in 1914

Booth Tarkington, born in Indianapolis in 1869, became one of Indiana’s most famous authors and playwrights, enjoying both commercial and literary success.

The Boone County bank featured equipment that was modern at the time, including model screw door safes with triple-time locks and substantial vaults.

The original Statehouse in Indianapolis was designed by architectural firm Town and Davis of New York in a Greek revival style and built in 1835 of brick and wood with a stucco exterior.

Leedy Manufacturing Co. in 1910 built a three-story building at the corner of Palmer Street and Barth Avenue, later expanding it to more than 51,000 square feet, to build drums.

The first mine in Warrick County—in the heart of Indiana’s coal country—opened on Pigeon Creek in 1818. By the end of that century, the Pigeon Creek area had some 97 active mines.

The 17-story building—the tallest building that sits directly on the Circle—is part of a National Register of Historic Places designation.